May 2nd, 2020: After weeks of speculation about the health of Kim Jong-un, North Korea's state-run television has aired a video of Kim attending the official opening of a fertilizer plant north of Pyongyang. Video: Reuters 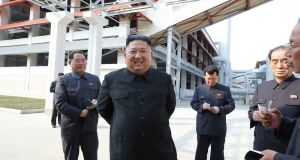 North Korean leader Kim Jong-un at a ceremony to mark the opening of a factory in Sunchon on May 1st. Photograph: KCNA/EPA

South Korea’s top spy doubts that Kim Jong-un had heart surgery, in the latest comments from Seoul pouring cold water on international speculation over the health of the North Korean leader.

Suh Hoon, the director of South Korea’s National Intelligence Service who spoke at a closed-door parliamentary intelligence committee on Wednesday, denied the 36-year-old dictator had suffered ill health or any procedure for cardiovascular disease, a lawmaker told the Financial Times.

“According to the NIS, Kim Jong-un is not thought to have undergone medical procedures or surgery,” said Kim Byung-kee, a member of the ruling Democratic party.

Mr Suh’s comments came just days after Pyongyang released photos and videos of Kim Jong-un at the opening of a fertiliser factory, his first public outing in three weeks.

The North Korean leader’s weeks-long absence from the public spotlight – which included missing an important anniversary for Kim Il Sung, his grandfather and the country’s founder – led to fevered speculation over his health. These included reports that the young leader, who is overweight and a heavy smoker, had undergone heart surgery.

Mr Suh acknowledged that Mr Kim had made fewer public appearances in 2020 than in other years, but that was probably partly due to the coronavirus pandemic, according to state news agency Yonhap.

Still, the questions over Kim Jong-un’s health exposed a lack of foreign insight into the North Korean leadership and raised concerns about western allies’ preparedness for instability if there was a power struggle in the nuclear-armed state.

“The [Koreans] were quick to dismiss speculations casting any doubts about Kim’s health. At times, they seemed to be offering too much information on the details than necessary. The US, on the other hand, neither refuted nor confirmed questions about Kim’s health situation,” she said.

Leif-Eric Easley, a North Korea expert at Ewha University in Seoul, said that North Korea had suffered reputational damage from the “rumour-filled weeks”, especially “as some discussions of instability seeped back to Pyongyang”.

However, Mr Easley believed the Kim regime will have gleaned information about its adversaries, too.

“The episode was also an intelligence gathering opportunity for North Korea,” said Mr Easley, “showing how much international observers can be swayed by misinformation, how the better informed South Korean government may rely on certain methods, and how Seoul and Washington lack co-ordination with Tokyo and Beijing over North Korean contingencies.” – Copyright The Financial Times Limited 2020