Ireland will not escape the bite of US-China tensions 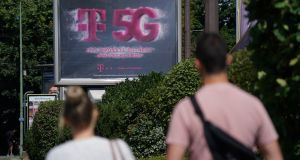 With the rise of nationalism, countries talk more than ever about sovereignty. But as any summit-hardened politician at home on the international stage will tell you, it’s an illusion. Put crudely: sovereignty is meaningless unless you’re on top of the heap; the undisputed global hegemon.

It’s that polarising reality that’s driving the current tensions between China under Xi Jinping wielding “wolf warrior diplomacy” and the United States under Donald Trump exhorting those disillusioned with globalisation to “Make America Great Again”. Both know there are no prizes for second place.

There are, of course, degrees of sovereignty in that countries form their own eco-systems with allies, creating mutually supportive spaces – international organisations, for instance – in which they can leverage the resources they have at their disposal.

Ireland’s controversial 12.5 per cent corporation tax is a good example of economic “hard power” in that context. Securing a UN Security Council seat is exactly what “soft power” might have been invented to describe: achieving a high-prestige goal through persuasion and old-fashioned goodwill.

There’s precious little goodwill on display between the United States and China, however, and it’s that apparent lack of willingness on either side to refrain from magnifying each and every grievance into a winner-takes-all confrontation that’s giving rise to fears of a new and sustained Cold War.

Such fears are not unrealistic. Why? Because while the contentious issues are many and legitimate – Covid-19; concern over technology giant Huawei; Beijing’s new security law in Hong Kong; the plight of the Uighurs – this “clash of civilisations” is fundamentally about economic dominance.

More than that, it’s about the pursuit of economic dominance combined with a new strain of jingoistic zero-sum nationalism in each country.

In China, wolf warrior diplomacy – a more aggressive diplomatic posture which, as president Xi put it, shows more “fighting spirit” internationally – can be traced back to 2010, when China’s economic growth overtook Japan’s for the first time, claiming the world’s second-largest GDP.

The certainty that it would soon overtake America as the world’s most powerful economy, and that the US would then, over time, most likely be overtaken by India as well, was promoted as a new source of popular pride, patriotism and confidence in the Chinese Communist Party’s stewardship.

So while there does, on the face of it, appear to be some emerging unease among the Chinese leadership about this more-strident messaging, one thing is beyond doubt. “Wolf warrior diplomacy is an extension of soaring nationalism at home,” says foreign policy expert, Professor Zhiqun Zhu of Bucknell University in Pennsylvania.

In the United States, there’s equally little doubt that Donald Trump’s equally strident brand of “America First” nationalism will be amplified as “a strategy that works” rather than softened in the run-up to the November presidential election.

A poll by Pew Research towards the end of April showed that 66 per cent of Americans now have a negative view of China, its worst rating since Pew began asking that specific question 15 years ago.

Given that poll, there’s a clear danger that, as part of a broader punitive regime, the White House’s anti-China rethoric will translate into action against Ireland as a result of Eir’s decision to use a combination of Huawei and Ericsson technology in its 5G telecoms network.

The result could be that just as Ireland struggles with the twin blasts of Brexit and Covid-19, it will come under pressure from Washington to take sides on the basis that – as an unnamed White House spokesman put it – telecoms networks cannot be “neutral” in conflicts involving national security.

In addition, the US is now targeting the entire Huawei supply chain, trying to prevent companies around the world from using software or hardware that originally comes from America to manufacture components based on Huawei’s designs.

In turn, if the US succeeds in blocking the supply of technology to Huawei, China’s next step may well be to use its “unreliable entity list” to try to restrict the activity of American companies such as Apple, Cisco and Qualcomm, says the editor-in-chief of China’s Global Times, Hu Zijin.

Both Qualcomm and Apple have significant operations in Cork, where the former has an engineering design centre and the latter is the city’s largest industrial employer with more than 6,000 jobs. Analog Devices in Limerick, with 1,200 employees, makes components for Huawei phones.

While retaliation remains notional, there’s no doubt that pressure will increase substantially after the summer when Germany is due to decide whether to allow Huawei to remain integral to its telecoms infrastructure or, like the UK, order a very expensive parting of the ways.

Angela Merkel’s Christian Democrats are divided on the issue, in addition to which Deutsche Telekom, a 32 per cent state-owned company and the country’s biggest mobile provider, already relies heavily on Huawei equipment.

Germany is pivotal. A decision to abandon Huawei could see other EU countries following suit like dominos. Sticking with the Chinese could stiffen European spines for a tough US response.

In either case, Ireland will need every ounce of the diplomacy that got it to the Security Council – a forum where, ironically, the geopolitical muscle of the US and China routinely put both well beyond the reproach of “lesser” states.

Peter Cluskey writes for The Irish Times from the Netherlands