Rite&Reason: At 90, he never ceases to generate original thought, profound and quizzical 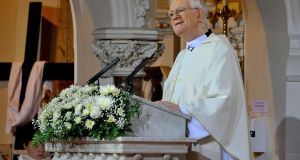 Fr Enda McDonagh: a powerful advocate of what he describes as theology at the fringe – a theology that puts the socially and politically excluded at its heart. Photograph: David Sleator

Enda McDonagh’s 90th birthday at the end of June reminds me that his close friend Seán MacRéamoinn, in a classic flight of fancy, once suggested that every Irish citizen should be entitled to have an official funeral while they are still alive.

The person so memorialised, he added, could be ensconced in an ingle-nook with a clay pipe and a bottle of poitín, and could listen to a gathering of friends and acquaintances saying nice things about him.

It is in precisely the same spirit that Enda’s friends can gather around him at this time – albeit in an incorporeal manner, given current restrictions on social gatherings – to mark this significant anniversary.

Living to a great age is not an unmixed blessing. And Enda will of course feel keenly the loss of a number of dear friends like Fr Joe Dunne and Dr Declan Meagher to anno domini.

At the same time, his own genius for comradeship will ensure that this particular anniversary will have been marked by many messages of congratulation and solidarity, not only from his contemporaries but from his many friends of all ages.

This is not an occasion for the funereal recital of accomplishments, publications and honours, but for celebration of a life that remains vital, alert, engaged and as sympathetic to the travails of the human condition as it is open to mystery and to faith.

How heart-warming it is to be able to write about him in the present tense.

Quite apart from his intellectual gifts, Enda continues to demonstrate a genius for hospitality and friendship. Until recently these were primarily on display in his rooms at Maynooth, which were always so crowded with books and papers that they resembled premises that had just been inexpertly burgled.

The catholicity of his interests – his primary degree is in science rather than in the humanities, and he has a life-long interest in drama – remains the hallmark of a mind that has never ceased to generate original thought, from the profound to the quizzical.

Some years ago, as the scandal of clerical abuse of children broke like a storm over an Irish Catholicism that had too often brushed this problem under countless carpets, he was heard to wonder aloud whether the problem of our contemporary Christianity was not that we had lost faith in God, but that God had lost faith in us.

He has often pointed out – as he did at his friend Garret FitzGerald’s funeral – the fragility of many apparently immutable centres of power and prestige, including the church itself, politics, banking, and economic development. And he writes powerfully about issues like these as well as addressing perennial themes like war and climate change.

He is a powerful advocate of what he describes as theology at the fringe – a theology that puts the socially and politically excluded at its heart, and takes its inspiration from the Sermon on the Mount.

Life at the margins

This involves, among many other things, a rejection of the triumphalism that feeds on a literalist view of traditional Catholicism, and seeks instead to explore life at the margins, where human dignity is often most vulnerable and even threatened.

His political views are as radical and as original as his theology, and are informed not least by his own memories of a childhood in the west of Ireland where the lives of so many of his contemporaries were curtailed by educational and economic deprivation.

His personality is marked by a warmth and a sense of humour that are infectious. He can also take a joke at his own expense. He was once, for instance, addressing a theological conference in Australia on faith, which he described as “a leap in the dark”. Then, momentarily attracted by another image which escaped from his lips before he had time to assess its full implications, he added: “Like marriage – that’s two leaps in the dark!”

His audience’s joy was unconfined.

His many friends have often wondered why he was never made a bishop. At the same time, they will reflect on the aphorism – common in earlier years but less relevant now – that among the implications of joining the episcopate were the possibility that that one was unlikely ever again to eat a bad meal – or hear the truth.

In the landscape that is Catholic Christianity today, there are many mansions, and Enda is living testimony to the fact that some of them are hospitable enough, and productive enough, without the trappings of that status.