The Irish Times view on direct provision: what’s the plan?

No Government representative has even begun to explore how 7,700 people can be moved into alternative housing 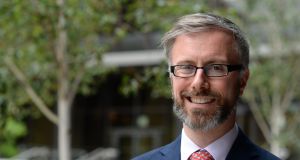 Minister for Children, Disability, Equality and Integration Roderic O’Gorman has spoken of taking ‘the meanness’ out of the direct provision system, and he’s quite right – the zeal to deter applicants has produced a needlessly mean-spirited system. Photograph: Dara Mac Dónaill

At no point since direct provision was established in 2000 have conditions been more propitious for its dismantling. A combination of public campaigning by asylum seekers and their supporters, a slew of reformist official reports, persistent international criticism and nudging from the Supreme Court has produced a situation where a comprehensive overhaul in the way the State runs its asylum process now seems inevitable. That’s important, because while changes have taken place in recent years, the crux of the problem remains: the State sub-contracts care for refugee applicants to the private sector and leaves those vulnerable people at a remove from society for the unacceptably long time it takes to have their cases decided.

The momentum for change has been maintained by the programme agreed between the coalition parties. In it they commit to “ending direct provision” and replacing it with a new policy “centred on a not-for-profit approach”. The Government will publish a White Paper by the end of this year, taking account of the forthcoming recommendations of an expert group chaired by former European Commission secretary general Catherine Day.

It makes sense to await the expert group’s advice, but the suspicion remains that the coalition parties lack a real sense of what an alternative to direct provision might look like – and certainly one that can be delivered in the lifetime of this administration. For “abolish direct provision” to be anything more than a slogan, the entire system of private accommodation would have to be brought to an end. But no Government representative has even begun to explore how the 7,700 people currently living in direct provision can be moved into alternative housing within five years.

The Minister responsible, Roderic O’Gorman, has spoken of taking “the meanness” out of the system, and he’s right. But the Greens and their coalition partners have had years to settle on a policy for replacing that system and they still don’t have one. Committing to abolition was an important step, but it was also the easiest one.