The Irish Times view on the election campaign: change – but what kind? 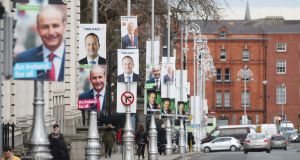 Ireland is a country looking for change. But it has not yet decided exactly what kind of change it wants, and it is nervous about some versions. Photograph: RollingNews.ie

This day week, Ireland goes to the polls to elect the 33rd Dáil, which will in due course choose the next taoiseach and government. The outcome remains wholly unpredictable. This is not just because the eventual winner (or at least the party that will gain most seats) is uncertain in a way not seen in the previous two elections, but because several different post-election government arrangements are at this stage equally plausible. Widely diverse outcomes remain possible.

The parties and Independent candidates will now embark on a frantic last week of campaigning as they seek to win undecided or weakly affiliated voters to their camps. Opinion polls thus far suggest that Fine Gael is trailing Fianna Fáil, while Sinn Féin is mounting a strong challenge to the two big parties. A further realignment of Irish politics, supplementing the big two with a third competitor, is a real prospect.

So far it has been a campaign dominated by the big parties. Despite their potential importance to government formation in the aftermath of the election – and the predictions that the Green Party would politically weaponise the issue of climate change – the smaller parties and Independent candidates have struggled to elbow their way into the centre of the election debate. That may yet happen.

Today we report on a series of focus groups conducted for The Irish Times by Ipsos MRBI in recent days. This device, extensively used by the political parties themselves, is designed not to predict the election outcome, but to give an insight into the thinking of crucial cohorts of voters about the issues relevant to them in the campaign and about the parties conducting it.

The research demonstrates that Ireland is a country looking for change. It has not yet decided exactly what kind of change it wants, and it is nervous about some versions. But the desire for a change is unmistakeable, it is deep and broad, and it is everywhere. It is the result of public concern with health and housing. And it is unlikely to dissipate before polling day.

The parties that prosper next weekend will be the ones that best accommodate themselves to that mood. Fine Gael seeks to convince voters it can improve public services and address the quality-of-life issues that concern voters; its prospects of success are narrowing. Sinn Féin needs to reassure nervous new recruits that its proposed changes will not undo the gains of recent years; Fianna Fáil wants to show voters that it can be trusted once again.

The smaller parties and Independents must compete for attention and a distinctive message that will register with voters as they make their choice. The political cacophony – and the political temperature – will only intensify in the week ahead.