Brendan Howlin: Only Labour is being serious about public finances

Election 2020: FG, SF and FF all trying to buy the election with unrealistic promises 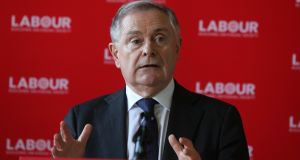 We are not promising to fix everything, but Labour’s commitments add up to a credible plan to bring Ireland closer to high-quality European standards in public housing and healthcare. Photograph: Garrett White/Collins

Child poverty is linked to joblessness and it doubled as the economy collapsed in 2008 under Fianna Fáil and 260,000 workers lost their jobs.

Labour has always said that a good job is the best route out of poverty, and when we entered government in 2011 we prioritised getting people back to work and improving pay.

We created over 40,000 training places annually between 2011-16 and reversed Fianna Fáil’s €1 cut to the minimum wage as soon as we entered government.

It worked. By the time we left government in 2016, income poverty among children was lower than when we entered government, and deprivation among children had fallen by a fifth, from 32 per cent to 25 per cent, contrary to Fintan O’Toole’s criticism in this paper on Monday of “Labour’s decision to take office and implement an austerity programme that, for example, doubled child poverty.”

Of course, statistics like this mean nothing for the one in 10 children living in consistent poverty today. But what is different now is that with economic recovery, we have the ability to radically reduce child poverty, as they have done in Denmark and Finland.

That’s why Labour TDs in the next Dáil will be prioritising this issue, including the re-establishment of the Combat Poverty Agency, developing a childcare scheme for working parents, raising the minimum wage to be a true living wage, bringing in a statutory child maintenance agency, raising the income of lone parents, making primary education genuinely free-of-charge and delivering child and adolescent mental health services in every county. These commitments are among the reasons why Labour, almost uniquely in this election, is making no reckless promises about tax cuts.

It is a pity there isn’t more objective analysis of the tax and spending promises of each party. Fine Gael, Sinn Féin and Fianna Fáil are all offering massive tax giveaways that will cut public spending by €8.6 billion, €7.2 billion or €5.2 billion respectively over the next five years. Yet all of them claim that they can invest more in housing and health at the same time.

Only Labour is being serious about the public finances. We will make modest reductions to income tax and USC, balanced by raising taxes on wealth and consumption (eg plastic cups, e-cigarettes) by no more than €400 million annually, for a net €3 billion extra of public spending over the next five years. We will concentrate available resources on housing and healthcare to solve these two major problems.

Labour wants a €16 billion fund to build 80,000 social and affordable homes on the land that we kept in public ownership. The money will come from the Strategic Investment Fund (€5 billion), the Nama surplus (€4 billion) and instead of the “rainy day fund” (€4 billion). To this we would add European Investment Bank funds and investment by the credit union movement.

We would bring national agencies under one roof, to make them more effective as a national housing development agency, and we would create regional housing executives as centres of excellence to restore the ability of local councils to build homes again. Unlike other parties’ pledges, these would be new homes, in addition to whatever the private sector is building.

Labour has also committed €1 billion per year of additional money for healthcare. This will end the HSE staffing embargo and end the wasteful €900,000-a-day spend on agency staff, as well as the €100 million Fine Gael give to private providers every year to plug gaps in the public system.

We are not promising to fix everything, but Labour’s commitments add up to a credible plan to bring Ireland closer to high-quality European standards in public housing and healthcare.

Fine Gael, Sinn Féin and Fianna Fáil are all trying to buy the election with unrealistic promises that can never be fulfilled. Only Labour is providing a real picture of what can be done with the available money.

After what they have endured, the Irish people deserve straight talking and the unvarnished truth.

Brendan Howlin is leader of the Labour Party

1 Could Ireland put towns under lockdown if coronavirus arrived?
2 IRFU seek meeting over call to postpone Ireland-Italy match
3 Dublin man may have been stabbed to death by woman in parking space row
4 Coronavirus: Irish holding back on holiday plans
5 Irish in Italy on coronavirus: ‘The city is in a bit of panic – the streets are empty’
Real news has value SUBSCRIBE