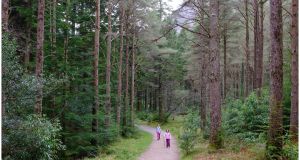 Fine Gael’s commitment to planting 8,000 hectares of forestry annually is vague on whether this will be biodiverse-rich native species or just more dead zones of industrial timber. Photograph: Bryan O’Brien

Last May, the Oireachtas declared a climate and biodiversity emergency. That was the easy bit. Since then, political inaction has spoken louder than words.

Despite Election 2020 being framed against an increasingly apocalyptic backdrop of rolling climate-fuelled disasters such as the Australian fires, there remains scant evidence that Irish politics has begun to grasp the meaning of the term “emergency”.

Nowhere is this more evident than in the election manifestos of the main parties, with Fine Gael’s being perhaps the most disconnected from reality. While it alludes to the need to “prevent catastrophic climate change”, it offers little indication as to how this useful goal might be achieved.

In October 2018, a report from the Intergovernmental Panel on Climate Change warned that in order to avoid locking in potentially catastrophic and irreversible impacts, global carbon emissions needed to more or less halve by 2030.

To put this in context, nothing on this scale has ever been attempted in peacetime. For Europe, it potentially represents the most far-reaching reboot since the Marshall Plan to reconstruct the ruined continent in the late 1940s

In terms of Irish emissions, the last 15 years have been quite literally an unmitigated failure, with improvements in the energy sector papering over spiralling transport and agricultural emissions. Our per capita emissions are now the third-highest in the EU.

Just days from the election, it remains extremely difficult to read the public mood on climate action. As recently as last October, more than half of respondents to an Irish Times poll regarded climate as a crunch issue, with most also prepared to personally accept a financial hit in tackling it.

With recent polling showing only 6 per cent of voters regarding climate as the decisive issue influencing their vote, can this extraordinary level of public concern have simply vaporised in the last few months, or is it lurking below the political radar, waiting to resurface as the X factor in this election?

With the three main parties running neck and neck in the polls, it is looking increasingly likely that whoever goes on to form the next government will need to have the Green Party on board, especially if it achieves about 10 per cent of the vote.

Unsurprisingly, the Greens’ manifesto on climate is the most ambitious, framed in terms of bending all policies towards the overarching goal of delivering 7 per cent annual emissions cuts, in tandem with major biodiversity goals.

Should Fine Gael be in pole position to form a government, it is difficult to see how the chasm in climate ambition between the two parties could be bridged. One of the few areas where Fine Gael appears progressive is in its plan to ban the sale of new diesel and petrol cars after 2030.

The party’s commitment to planting 8,000 hectares of forestry annually is deliberately vague on whether this will be biodiverse-rich native species or just more dead zones of industrial timber.

Fine Gael plans to increase carbon tax to €80 a tonne by 2030, but its manifesto includes the clearly counterintuitive commitment to “increase the fuel allowance” as a measure to offset the impacts of the tax.

Should Fianna Fáil be wooing the Greens into coalition, their manifesto gives them a clear edge on the outgoing government. While all three major parties have run scared of proposing herd reduction to mitigate spiralling agri sector emissions, Fianna Fáil ups its game on biodiversity, and overall is felt to be pliable on key green demands.

This has been significantly eroded over the last decade. You have to seriously question our values when favoured interests like the (private) greyhound and horseracing industries receive vastly more taxpayer largesse than wildlife and biodiversity protection.

Fianna Fáil and the Greens would also broadly agree on commitments towards rewilding and marine protected areas, plus supporting a full ban on smoky coal and rapid rollout of a national retrofitting programme.

One Green Party proposal that could transform the apparently deadlocked agricultural debate is to increase the amount of Irish land farmed organically to 20 per cent by 2030.

At a stroke, this would cut emissions and pollution, reduce damaging and expensive inputs, boost biodiversity and reward farmers for protecting nature.

If Sinn Féin is in the mix, its flat rejection of carbon taxes (a view also held by People Before Profit) could present a serious roadblock to any agreed climate action programme, but there is common ground on issues like fracking. However, senior Green Party sources indicated scepticism around Sinn Féin’s actual commitment to a strong climate agenda.

Sinn Féin’s proposal to trial a “basic environmental income” for farmers to reward them directly for stewardship is worth exploring. Some of its proposals appear inconsistent; for instance, it wants to strengthen trawler inspections while weakening farm inspections.

With just 10 years in which to radically transform Ireland’s energy, transport and agricultural systems, this election may well be the most significant in decades. This Saturday, think globally, then vote for the parties and people that best represent your values.