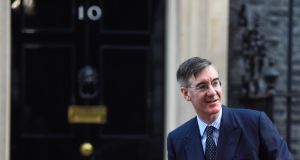 For decades, Jacob Rees-Mogg and his band of merry gentlemen have been off-kilter when it comes to the rest of Britain. Photograph: Peter Summers/Getty

Despite being in the midst of costly repairs, Big Ben sounded out on December 31st to mark the advent of a new decade. Inspired by this symbolism, the nation’s most ardent Brexiteers were desperate for the repairs to be suspended once again on Friday so that the bell could ring out to mark Britain’s exit from the European Union, welcoming a new age of prosperity and sovereignty.

On New Year's Eve, we celebrate the end of a long 12 months. We share joy in each others’ achievements, and commemorate difficulties endured along the way. And the evening is buzzing with anticipation for the 12 months to come.

So too on Friday evening Brexiteers will be celebrating their achievements – they quelled the pesky Remoaners; stood up to a parliament that tried to defy them so many times; crushed the opposition; and cast defiance in the face of an overweening EU. And they will buzz with anticipation at the possibilities for Britain’s future, now liberated from the cumbersome shackles of Brussels’s shadowy lawmakers.

Unfortunately for Brexit’s champions – congratulations to Tory MP Mark Francois who personally pledged to donate £1,000 to the cause – Big Ben will not ring to mark the dawn of a new age for Britain on account of ongoing repairs. And perhaps too because some might find the commandeering of one of Britain’s most recognisable symbols to make a highly divisive political point a little tasteless.

The so-called “Spartans” of the Tory party’s European Research Group (ERG) might very well be disappointed by this. But as they raise a glass to Brexit they will be out of step with the rest of the United Kingdom. There is an unavoidable, and overwhelming sense across the UK that there is very little energy left for Brexit at all.

For decades, the likes of Jacob Rees-Mogg and his band of merry gentlemen have been off-kilter when it comes to the rest of Britain. After the UK’s entry to the European Economic Community and later the union, their lofty rhetoric about sovereignty, empire,and the balance of trade – leavened with heavy passages of Milton and Shakespeare – provoked mostly bafflement and sometimes sniggers.

While Euroscepticism has a long heritage across the British political landscape, its Moggite strain was always a minority concern. The referendum didn’t change that – the average Brexit voter has always been far more interested in the state of public services and the functioning of the National Health Service than reconquering the Punjab.

As the Brexit debate dragged on over months and years so too did people become weary with its ubiquity. Johnson was right when he said people were sick of Brexit – they believed his message (rightly or wrongly) in the hope that after the several months and years the government has spent working out its exit from the European Union, it can now invest vital time into improving the NHS and the welfare system.

The energy has dissipated – and the best gesture the government can come up with to mark their Brexit victory is with the minting of a patriotic coin. The coin’s only impact so far has been to fuel thousands of online arguments about the propriety or otherwise of the Oxford comma.

But as the likes of the ERG pop champagne corks regardless of a wider national sentiment, their celebration will be a strange one. It will mark just the start of an equally complex and potentially divisive phase in UK-EU relations. Leo Varadkar and Simon Coveney are right to remind voters in Ireland that “it’s only half-time” on Brexit.

On Friday night Brexiteers will not – in spite of what they may think – be toasting to the end of the UK’s EU membership, but rather to the commencement of the first negotiations the UK will have ever entered as the dramatically weaker power.

The UK, we shouldn’t forget, hasn’t conducted its own trade negotiations in the past 40 years

The UK’s negotiating team, headed up by David Frost, will spend the next 11 months tussling with Michel Barnier’s Brexit task force and Irish EU trade don Phil Hogan. There will be rows over fishing, reams of technical disputes over goods regulation and the infamous “level playing field” will become a mainstay in all of our vocabularies. And we should not forget that Northern Ireland will continue to be highly contentious.

Parliament might not cause Johnson many problems – thanks to his 80-seat majority – but that does not mean there aren’t serious road blocks ahead. And navigating those in 11 months may not even be possible at all. The UK, we shouldn’t forget, hasn’t conducted its own trade negotiations in the past 40 years.

Partying and jubilation at this stage in Brexit – while the country is preoccupied with other matters, and while there are thousands of questions left to be answered and even more arguments waiting to be had – is akin to celebrating a win at half-time. Or holding a party on a Tuesday night?