Governments must build on momentum and forge Stormont deal 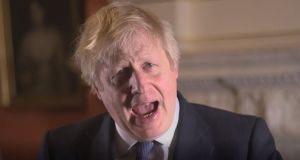 Sometimes, if not often, the stars align in politics and a door opens to the future in an unexpected way. That is the situation in Northern Ireland post-election. There is now a real chance for the two governments not just to restore Stormont but to do so in a way that makes it work in a much more effective and durable way for the benefit of the people in Northern Ireland.

But to do so the British government, in particular, must be prepared to use the leverage it now has to persuade the parties to make the necessary compromises in the talks process now under way again.

That means putting the clear majority Boris Johnson won at the election to work. He shouldn’t underestimate the additional power that gives him in the negotiations.

Not only does the DUP know he is no longer dependent on its votes, it also knows – as it did with Tony Blair after the Belfast Agreement – that he is secure in power for the next five years, at least. It now has to deal with that reality rather than hoping its can avoid making the necessary hard choices and wait for someone else to hold the reins of power.

Johnson should use that leverage to insist on significant changes to the way the agreement was being implemented, not just by the DUP but also Sinn Féin. Its command-and-control approach which, effectively, shut out the other parties must end.

There needs to be more  emphasis on coherent policies across the political divide on  health, education, housing and infrastructure

There must be much greater accountability to the Assembly as a whole and the Petition of Concern procedure which allowed the DUP and Sinn Féin to veto any decision either party did not like must be dropped. But there also needs to be much greater emphasis on achieving coherent policies across the political divide on issues such as health, education, housing and infrastructure.

Sir Patrick Coghlan’s report into the Renewable Heating Incentive payments scandal will provide a starting point for such a reform programme, but it will only work if the Executive works in a genuinely more consensual way rather than the divide-and-rule approach of the past. The party controlled baronies must be broken down.

Why should the DUP and Sinn Féin go along with such a radical change? Because the election underlines that they have nowhere else to go.

The DUP’s hubris over Brexit and the way it conducted itself at Stormont has been punished at the polls in the most painful way possible. While still the majority party in unionism, it is increasingly in a minority overall – and knows it.

Equally Sinn Féin, while better able to hide the scars because of John Finucane’s victory in North Belfast, also lost support in key areas. The loss of Foyle to the SDLP was a clear message not just on abstentionism, but also on the limits of being just a party of protest. That will hurt it come the election in the Republic.

Neither party will want to face the electorate in Northern Ireland again soon and yet, if Stormont isn’t revived quickly, that could be the reality. Fresh Assembly elections, conducted under proportional representation, are only likely to inflict further damaging losses.

Added to that is another factor: the consolidation of the centre ground. However you calculate it, the middle ground in Northern Ireland continues to grow. Predictions that it would get squeezed by the duopoly of Sinn Féin and the DUP in a first-past-the-post election proved wrong. Alliance now consistently hovers around the 20 per cent mark. The Social Democratic and Labour Party (SDLP) has revived and the Ulster Unionist Party (UUP) will have to modernise or face extinction. Both the DUP and Sinn Féin know that they will have to try to appeal to that centre ground if they are to achieve their ultimate goals, either of securing the union or ending it.

However you calculate it, the middle ground in Northern Ireland continues to grow

For all these reasons Johnson, and the Taoiseach, have the wind at their backs as they guide the current talks.

But there is one other factor too – and maybe it is the most important one.

The public have run out of patience.

Thirty years ago, getting all the parties in the same building at the same time – even if it was only the BBC building in Belfast – was seen as a major triumph.

Twenty years ago, getting most of the parties signed up to the Belfast Agreement was seen as a huge breakthrough – as was getting Ian Paisley and Martin McGuinness around the same table in June 2007.

Twelve years on people want more. The health service in Northern Ireland is in crisis. There are major decisions to be taken in virtually every public policy area, plus the complications added by Brexit. People are fed up hearing their politicians blame each other for not dealing with those issues. They want them to get back to work.

And that message seems to have come across loud and clear to the parties on the doorstep in December. In response, the DUP published alongside their manifesto a document they called The Plan with the subtitle “Let’s get NI moving again.” Sinn Féin spokespeople, post-election, talked much more about getting Stormont up and running again than pushing for a Border poll.

The governments need to build on that momentum and use the coming weeks to forge the necessary deal.

In Northern Ireland pessimism is always easy. Cynicism is bred in the bones – and with good reason. But this election has shown that change can happen. That there are now limits to the polarising effect of the two traditions and that there is a viable centre ground tradition which is neither Orange or Green.

It is now time that the governments ensure that all three traditions are reflected in government at Stormont – and that that government works fairly, effectively and efficiently for all the people of Northern Ireland.

1 Who are Ireland’s 17 billionaires?
2 Taoiseach claims Sinn Féin not ‘a normal political party’
3 Ireland’s favourite takeaway revealed
4 52 places to go in 2020: Here’s where the New York Times says you should visit
5 Yacht captain guilty of drunk sailing had ‘God given right’ to be on Liffey
Real news has value SUBSCRIBE