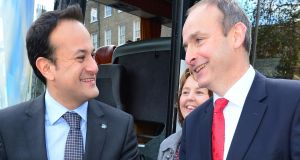 Taoiseach Leo Varadkar deserves credit for the subtle way he played the Irish card at the end of a high stakes game of political poker in the Brexit process, while Fianna Fáil leader Micheál Martin did well to stand firmly by the national position throughout the process. Photograph: Bryan O’Brien

The political issue that dominated all others in terms of national importance over the past year was Brexit. At various times a no-deal crash-out of the European Union by the United Kingdom with immediate and devastating consequences looked like a very real possibility. The Government’s insistence on the backstop to prevent a hard border on the island as part of the withdrawal agreement became an important bottom line for the EU and was widely portrayed in the British media as the only stumbling block to an agreement.

The Government held its nerve and resisted pressure to ditch the backstop as British politics went through one crisis after another during 2019. The solidarity shown by Ireland’s EU partners and the negotiating skills of Michel Barnier and his team of officials at the European Commission were vital in ensuring the Irish position was protected.

In the end, the judgment in Dublin and Brussels that the new British prime minister Boris Johnson would seek a deal, in spite of his bluster about being willing to take the UK out without one, proved correct. Taoiseach Leo Varadkar showed political skill in the way he refused to be bullied into binning the backstop but was prepared to modify it when it was clear Johnson was looking for a way out.

The outcome was an agreement that provides for a border in the Irish Sea rather than on the island of Ireland in the event that the UK leaves the EU customs union and single market. It was always the logical solution to the conundrum but one which was opposed tooth and nail by the Democratic Unionist Party (DUP) which used its influential position in Westminster to block such a deal until Johnson ditched them without warning. It was a brutal political lesson for the DUP.

Varadkar deserves credit for the subtle way he played the Irish card at the end of a high-stakes game of political poker. Minister for Foreign Affairs Simon Coveney and the Irish officials involved in the process also did their work well, as did Fianna Fáil leader Micheál Martin and most members of the Dáil, who stood firmly by the national position throughout the process.

Unfortunately, Varadkar’s achievement on the international stage was not matched by a similar performance on domestic issues. In particular, housing and health continued to prove intractable as the year progressed. As usual the health service swallowed up more money than it had been allocated at the beginning of the year, causing the annual headache for Minister for Finance Paschal Donohoe.

Booming corporate tax receipts gave the Minister the leeway to bail out the health service but the failure of the HSE to live within its budget cannot continue, particularly as the corporate tax bonanza is forecast to dry up in the coming years. A radical overhaul of the health system is needed. The proportion of the nation’s wealth that goes to the health service is higher in Ireland than most other developed countries so simply throwing more money at it year after year will not solve the underlying problem.

The report by the expert group chaired by Donal de Buitléir proposing that hospital consultants should no longer be allowed to use public health facilities for their private patients is a step in the right direction.

Other measures to tackle the stranglehold of the consultants and the other vested interests in the health service will be required to reduce the lengthy waiting lists in the public health system and the unacceptable delays in emergency departments.

The other seemingly intractable problem which the Government has failed to cope adequately with is housing. Not nearly enough social housing is being provided. The number of units coming on stream in the private housing market is increasing but not at a fast enough pace, while rents have climbed to exorbitant levels. All of this has contributed to a homelessness crisis which shows no signs of abating.

Ineffectual efforts to deal with the complex issues involved in the housing crisis with sufficient pace, vision and ambition has undermined public confidence in the ability of the Government to come up with the answers to the problem. When the general election takes place in the coming months, Fine Gael will be acutely vulnerable on the housing crisis it has failed to deal with.

We end the year with almost 4,000 homeless children in the State – a figure that has barely changed in 12 months. In all, some 105,000 children are living in consistent poverty. These are direct indictments of Government policy.

One bright spot has been the way Donohoe has managed, somewhat belatedly, to get to grips with the challenges in the public finances. He availed of the Brexit crisis to convince the Dáil and the country of the need for budgetary restraint. Whoever forms the next Government would be well advised to ensure that the country does not walk itself into another financial crash as a result of rash election promises.