Of all people, the pontiff and his staff should understand the fervour of pilgrims in St Peter’s Square

Pope Francis has apologised for having angrily slapped a woman’s arm when she had grabbed hold of his hand and pulled him towards her in St. Peter's Square. 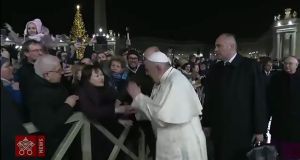 Though the pope and the Vatican have undoubtedly been burned by this latest incident, it is unlikely that their relationship with social media is at an end. Photograph: Vatican Media/AFP

Pope Francis was caught on film slapping away the unwanted attention of a pilgrim in St Peter’s Square last week. An early convert to Twitter, he has been active on social media since 2012. Indeed social media brings the pope and the papal message to a wider audience. The pope has 18.2 million followers on Twitter and 6.4 million on Instagram, unfathomable to us mere mortals. In fact in the lingo of our times, he is a social media influencer.

To the incident itself. It occurred while the pope was making his way to the nativity scene in Vatican City on Wednesday. The incident and its aftermath offers an interesting window to the world, or perhaps more correctly to two worlds. It throws into sharp relief the different experiences and expectations of within the Catholic Church.

An invasion of personal space appears to increase physiological stress, reduces our ability to concentrate and can result in impulsive decisions. Like slapping someone away

Devout Catholics have a potentially insatiable appetite for the papal presence and will endure jostling crowds and a long wait for a brief glimpse of the pope. On the other hand, the now elderly man that is the pope aims for quick passage through this human mill.

The video clip begins with the pope happily engaging with the crowd. In fact the incident that culminates in slapping a pilgrim away begins with him seeking to make physical contact with a young child carried aloft their guardian’s shoulder. So we can assume that though he is happy to have contact with pilgrims, by choosing to shake a child’s hand the pope is communicating his interest in brief and light-hearted exchanges.

A good idea, it is easier to be an angel if nobody ruffles your feathers. Approaching the throng this way allows the pope to maintain his personal space. For all of us, protecting our personal space is important. It allows us to feel safe, and stay focused on the task at hand. An invasion of personal space appears to increase physiological stress, reduces our ability to concentrate and can result in impulsive decisions. Like slapping someone away.

Pilgrims though share space in a way that many of us would not tolerate in everyday life. And while I, like many Irish people, have been in St Peter’s Square, my interest in staying to see His Holiness address the crowd, as he often does on a Sunday at noon, waned as the numbers increased.

In St Peter’s many, particularly religiously committed pilgrims, are happy to bear the throng. And it is not just Catholic pilgrims that suffer crowds gladly. It is estimated on a single day that up to 30 million Hindus chose to bathe together at the Mela festival. What is most astounding is that devotees, sardined at the confluence of the Ganges, report joy and elation. This fervour is evident in the pilgrim that latches onto Francis in the video and is then unwilling to let him go. Strong faith and the belief that the pope is the earthly representation of Christ probably drives her behaviour. Worldly considerations like personal space pale if you believe you are facing divinity.

Of all people the pope and his staff should understand this. And so perhaps another surprising aspect of the incident is that it could happen at all. Given his global following, the pope’s behaviour is liable to scrutiny. And the fact that much of his written and spoken message is a moral: encouraging people to think about equity, justice and the protection of the most vulnerable in society, he has to be beyond reproach.

Shortly after the videoed incident, he exhorted that we tackle all forms of violence against women and girls. This mismatch between the pope’s verbal and nonverbals offered the “twitteratti” an open goal.

Those that have criticised the pope for being unnecessarily aggressive or for not taking time to speak to the frantic pilgrim, were never in the Vatican’s camp anyway

In the digital age leaders are rarely part of the crowd and there are many cameras trained upon them. Social media is increasingly reliant on visual imagery. The importance of visuals whether, pictures, memes or videos, in terms of current social media cannot be overstated. Instagram as a social medium relies entirely on pictures. TikTok, the new platform particularly popular with teenagers, is a video sharing app. The power of pictures is often in their ability to capture nonverbal communications. Indeed it may be time for the Vatican to upskill. I expect developments.

Though the pope and the Vatican have undoubtedly been burned by this latest incident, it is unlikely that their relationship with social media is at an end. Those that have criticised the pope for being unnecessarily aggressive or for not taking time to speak to the frantic pilgrim, were never in the Vatican’s camp anyway. The pope’s ability to influence this group was already pretty negligible.

On the other hand, those who are highly identified with the church or the pope will forgive his error. We know this not only from a whole host of studies in social psychology, but also from the way engaged followers are happy to justify sins of their political leaders. And often they haven’t even had the good grace to ask for forgiveness.