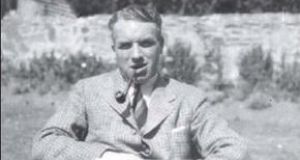 Dr James Deeny, who became chief medical officer of the Department of Health in the late 1940s

Writing about the astronaut Michael Collins yesterday, I mentioned that he was two generations removed from West Cork, where his grandfather had been born only a few miles from the later birthplace of another famous Michael Collins.

Well, among the intervening generation of the American family was the astronaut’s uncle, J Lawton Collins, a distinguished soldier who started his career as a lieutenant in the first World War and rose to be the US army’s chief of staff during the war in Korea. In between, he had spent some of the second World War stationed in the land of his ancestors – albeit not the jurisdiction that includes Cork – where his adventures included at least one crash-course in Irish politics.

The story features in a book called To Cure and to Care, the memoirs of Dr James Deeny, who became chief medical officer of the Department of Health in the late 1940s and was a very influential figure in the Republic’s health system during subsequent years. But before that, Deeny had been a GP in his native Lurgan, Co Armagh, where various members of his family had adjoining homes.

By 1942, one of the houses had been requisitioned by the US army, while senior chaplains were billeted on Deeny’s parents, and his own house – next door – became a nightly meeting place for senior officers, who played poker there and showered his children with “candy bars and orange juice”.

But in August 1942, the peace of the area was disturbed by the shooting of a policemen, as a result of which six young men were condemned to death. Their fate attracted widespread attention on either side of the Irish Sea. The then-archbishop of Armagh, Cardinal MacRory, was under pressure to intervene. And since he was a friend of the Deenys, they too became involved.

Someone decided that the American general might be prevailed upon to appeal for clemency, so James Deeny, who knew him by then, was deputed to ask. Their formal meeting took place in Lurgan’s stately Brownlow House, a base for US troops that also happened to be the world headquarters of the Orange Order.

Deeny presented his case, but the general quickly disabused him of any notion that the Americans, as guests of the Northern Ireland government, would interfere with local justice. Collins accompanied this with “a speech on the iniquities of the Nazis”. But something he said so riled the young doctor that Deeny reciprocated with an “impudent” lecture of his own:

“I told him that the Orangemen whose headquarters he was sitting in were, from our point of view, quite as bad as the Nazis. That there was no use going to Germany or whatever to fight an enemy when he had it on his doorstep and so on. He got very mad.”

The other officers, by contrast, were highly amused by Deeny’s cheek, which may have saved him from anything worse than being thrown out “politely”. And Collins’s refusal to get involved would not in any case prove fatal. The prisoners didn’t hang.

Deeny’s early medical career was blighted by the sectarianism of Northern Ireland, where many jobs were denied to him on religious grounds. Elsewhere in his autobiography, he wrote: “Coming to Dublin was wonderful. For the first time I discovered my country [and] felt a free citizen”.

But whatever his experiences with Orangemen, Deeny was also briefly famous in the early 1940s for his treatment of the so-called “Blue Men” of Lurgan. These were two patients who suffered from a rare congenital form of methaemoglobinaemia, an irregularity of the iron-containing haemoglobin.

There had been a few well-known cases elsewhere, most notably the “Blue Fugates”, a family in 19th-century Kentucky.

But the ones in Lurgan were Ireland’s first.

Deeny treated them with ascorbic acid and sodium bicarbonate, and the blue appearance which was a side-effect of the condition disappeared within days

In his autobiography, he discusses subsequent studies of the condition by others and also basks in the glory of two scientists who later discovered the molecular structure of both haemoglobin and myoglobin, “marvellous work” that earned them the 1962 Nobel prize for physiology or Medicine.

But then he reminds himself of the importance of “a proper sense for humility” for anyone working in science: “Sometime later it was found that a decent country-woman living in the middle of the County Tyrone had a family with some ‘blue’ children. She found that when she fed [them] cabbage, they became nice and pink. When she stopped, they became ‘blue’ again. So they got plenty of cabbage to eat. But she never won a Nobel prize.”

1 Fianna Fáil may have just pressed the pause button on the property market
2 UK to prioritise EU trade deal over one with United States
3 Election 2020: 10 key questions to ask candidates on your doorstep
4 Terry Jones, Monty Python star, dies at the age of 77
5 Which jobs do teenage girls and boys aspire to have by age 30?
Real news has value SUBSCRIBE