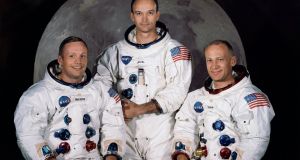 The Michael Collins who fought for Irish freedom and the Michael Collins who piloted the Apollo XI command module during the 1969 moon landings had more than just a name in common. They also both had origins in West Cork: first-hand in the case of the revolutionary, two generations removed for the astronaut.

The latter was (and remains, aged 88) a grandson of Jeremiah Bernard Collins, who left Dunmanway as a boy in the 1860s, a generation before the future Irish republican was born at Sam’s Cross, a few miles farther south.

Family lore has it that, newly arrived in Cincinnati, the emigrant served as a drummer boy in the civil war. In his teens he helped drive a herd of horses to Texas to replace lost cavalry mounts. Then he moved to New Orleans, working for a grocer called James Lawton and marrying the boss’s daughter Kate, with whom he would have 11 children and establish a store of his own.

The oldest child, James Lawton Collins, became father of the astronaut, but in his own right was an army general, another echo of the Cork Collins. In fact, there were so many military men in the US Michael Collins’s family – one uncle was chief-of-staff, another a brigadier – that he joined the US Air Force partly to escape suggestions of nepotism.

James Lawton Collins had inherited his father’s way with horses: he was a skilled polo player and a shrewd judge of breeding. This may explain why, in the astronaut’s autobiography Carrying the Fire (1974), equestrian metaphors loom large. On the risks of aviation, for example, he quotes the pioneering Wilbur Wright:

“There are only two ways to ride a fractious horse; one is to get on him and learn by actual practice how each motion and trick may be best met; the other is to sit on a fence and watch the beast a while, then retire to the house and at leisure figure out the best way of overcoming his jumps and kicks. The latter system is the safer, but the former […] turns out the larger proportion of good riders.It is very much the same in learning to ride a flying machine.”

Collins’s memoir is a breezy account of his epic journey to the dark side of the moon.  That began with a week of physical and psychological assessments in which “inconvenience is piled on top of uncertainty on top of indignity, as you are poked, prodded, pummelled, and pierced”, with “no orifice” spared.

It ended, 50 years ago next month, with a curious celebrity (especially in table quiz circles), as Collins became the Apollo XI crew member who didn’t walk on the moon. Instead, while Neil Armstrong and Buzz Aldrin enjoyed that glory, he spent a day in lunar orbit, alone.

During his time on the dark side, Mission Control commented that “not since Adam has any human known such solitude as Mike Collins is experiencing”.

But the man himself never felt lonely. What he did feel, as he admitted years later, was worried for the safety of his colleagues and fearful he might have to return to Earth without them, a “marked man” for life.

Happily that didn’t happen and his book includes pithy pen-pictures of all the surviving astronauts of that historic era.

Of Armstrong he noted: “Makes decisions slowly and well […] rolling them around his tongue like a fine wine and swallowing at the very last moment (He had twenty seconds of fuel remaining when he landed on the moon.)”

Of Aldrin: “Fame has not worn well on Buzz. I think he resents not being first on the moon more than he appreciates being second.”

Having originally planned to call the book “World in my Window” before deciding that was too corny, Collins explained how he chose “Carrying the Fire” instead.

It was a reference to the Greek god after whom the lunar missions were named, whose responsibilities included transporting the sun across the sky in a chariot.

As an astronaut, Collins was forced to ask himself how mere mortals could carry fire through the heavens, and answered: “Carefully, that’s how, with lots of planning and considerable risk.”

The same god was synonymous with youth, athleticism, and good looks. This might be why he was also invoked in print after the death of the other Michael Collins – a fire carrier too, in a way–- in 1922. The Irish Times prefaced a poignant account of the funeral with a quotation from Christopher Marlowe: “Cut is the branch that might have grown full straight,/And burned is Apollo’s laurel bough.”