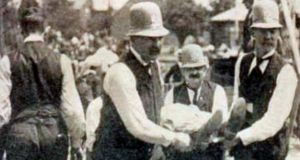 In New York’s East River, between Manhattan and Queen’s, is a narrow tidal strait called Hell Gate. The name is apt, if accidentally so, because in the original Dutch Hallegat, it just means something like “clear opening”. But as a rock-strewn inlet full of tricky currents, it sank many a ship down the centuries and in the process more than justified its anglicisation.

From the middle of the 19th century onwards, for decades, there were concerted attempts to blast a safer path through Hell Gate. Among these, in 1885, was the biggest man-made explosion anywhere before the first World War, which also earned the dubious distinction of a mention in one of Bram Stoker’s lesser literary successes, The Lair of the White Worm. The latter has featured in at least one critic’s list of the worst horror novels ever written. So without worrying unduly about spoiling the plot, we can reveal it culminates with a planned explosion, before which one of characters reassures another by mentioning the famous Hell Gate blast, which some people had expected would “shatter every pane of glass in New York”, but didn’t.

Alas, the strait’s worst maritime disaster was yet to come in 1885 and, among other things, would earn it in a part in a much more famous book written by a Dubliner. It happened on June 15th, 1904, when a ship called the General Slocum, billed as “the largest and most splendid excursion steamer in New York” left Manhattan for Long Island.

Most of the passengers were from an area of the East Village known as Kleindeutschland, “Little Germany”, because the voyage was an annual, end-of-school outing for parishioners from St Mark’s Evangelical Lutheran Church.  Women and children, dressed in bible school finery, were disproportionately represented on board.

The tragedy started with a fire below deck, but was quickly exacerbated by the ship’s criminally low standards of safety training or equipment. Rotting firehoses – certified effective a month earlier – burst as soon as they were turned on the flames, and no lifeboats could be launched.

Afraid to turn in the currents, the captain instead steamed ahead for a pier at 134th street, but was warned away from that because of fears his ship would ignite large stores of lumber there. So then he aimed for North Brother island, a mile away. But the wind and his urgent speed fanned the flames.

Rather that burn to death, many people who couldn’t swim jumped overboard. And in one of the cruellest twists, life jackets proved to be rotten too, disintegrating in the water. By the time boats rushed to Hell Gate to pick up survivors, they found mainly the floating bodies of children.

By next day, word of the event had travelled across the Atlantic and newspapers, including this one, reported preliminary estimates of 500 dead. In fact, the official toll would be more than twice that, and it too was probably an underestimate.

In the meantime, of course, the story became part of the backdrop to James Joyce’s Ulysses. The epic novel transposes the mythology of Homer’s Odyssey – in which a shipwrecked hero struggles to find his way home after the Trojan War – to the mundane events of June 16th, 1904, in Dublin. But via the day’s news headlines, the real shipwreck in New York also haunts the characters at several points.

Leopold Bloom learns of it from the Freeman’s Journal and reflects on the horror in an internal monologue: “All those women and children excursion burned and drowned in New York. Holocaust.” Elsewhere, the smug Father Conmee worries mildly about the souls of the departed, Lutherans as they were: “In America those things were continually happening. Unfortunate people to die like that, unprepared. Still, an act of perfect contrition.”

Meanwhile, in a pub on James’s Street, Tom Kernan and the barman Crimmins between them summarise the worst aspects. “A thousand casualties. And heartrending scenes. Men trampling down women and children. Most brutal thing. What do they say was the cause? Spontaneous combustion? Most scandalous revelation. Not a single life-boat would float and the firehose all burst.”

But as they hint at the corruption behind it, the tragedy is already being filtered into cynical Dublinese: “What I can’t understand is how the inspectors ever allowed a boat like that … Now, you’re talking straight, Mr Crimmins. You know why? Palm oil. Is that a fact? Without a doubt. Well now, look at that. And America they say is the land of the free. I thought we were bad here.”

1 Three relatives dead after apparent murder-suicide in Kanturk, Co Cork
2 Don McLean: ‘My ex-wife is the worst person I ever knew’
3 Woman stranded in Ireland due to pandemic has ‘miracle baby’
4 Almost 20% of staff at Dublin hospital have antibody evidence of Covid-19 infection
5 ‘Difficult months ahead’: Europe prepares for more pain as Covid cases soar
Real news has value SUBSCRIBE