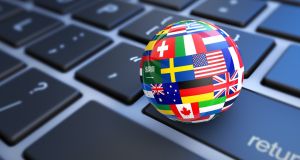 “If Brexit ever happens, it will leave Ireland as the European Union’s only officially English-speaking country. Or maybe not.” iStock

When my local supermarket changed ATMs recently, the new machine featured an interesting reflection of the modern Irish economy. Among the six languages in which it offers services are Polish and Romanian, along with French, German, and – for more mysterious reasons – Dutch. But the most striking details are the national flags alongside these options, and in particular the one used for “English”: the Irish Tricolour.

The ATM appears to be anticipating Brexit, which if it ever happens will leave Ireland as the European Union’s only officially English-speaking country. Or maybe not. Writing in the Financial Times last month, the Dutch-born but Oxford-educated Simon Kuper argued that his native country would be the real anglophone centre of a post-Brexit EU.

Dutch was dying out, he said (our ATM appears not to have heard this rumour) and, whereas his generation of Netherlanders had grown up speaking merely “excellent” English, their children now speak it to perfection, just as the continent’s original Anglophones are opting for exile. Ireland would get some post-Brexit “pickings”, he conceded, “but it’s less populous, in the wrong place and has inferior infrastructure”.

We’ll take his point about the excellence of Dutch English anyway. I was impressed by that the first time I visited Amsterdam, more than 30 years ago, when eavesdropping on an American tourist trying to chat up the barmaid in our youth hostel. “You speak really good English,” he patronised her at one point. And without missing a beat, she replied: “Thank you – so do you” (she was lying, actually – his wasn’t great).

Anyway, all of this is by way of noting the timeliness of an event starting at the University of Limerick today: the 24th annual “Conference of the International Association for World Englishes”.

But Brexit will also feature, via such questions as whether the UK’s departure may encourage the growth of a more recent dialect: “Euro English”. And with the privilege of all hosts, the conference organisers have also smuggled in an impressive number of papers on the language as spoken in this country.

Among these is one inspired by my fellow columnist, that great chronicler of speech in Dublin’s deep south – the Dodder Delta region – Ross O’Carroll Kelly. Specifically, it will study his use of one phrase, “yeah no”, which is now crucial to social life to in those parts.

It’s what linguists call a “pragmatic marker”: transcending the primary meaning (if it has one) to double as an indicator of “urban sophistication among young, affluent Southside Dubliners”.

I’m also delighted to see that the conference will consider the use of “understatement” as an Irish communications strategy. This is not unique to Hiberno-English: English-English does a good line in it too.

But as someone who compiled a History of Ireland in 100 Euphemisms here a while back, I do think we have a national talent for disguising harsh realities with mild words. And as another conference abstract acknowledges, this creates problems for linguistic researchers: namely how do you search out examples of deliberate understatement buried in text? Speakers will present the latest findings on finding them.

Getting back to Brexit and the idea of a “Euro-English” – Irish accented or otherwise – becoming the EU’s new lingua franca, I’m reminded by yet another topic in the conference book of abstracts that this would be nothing new.

Something similar happened in 17th-century China, when “Pidgin English” evolved as a language of international trade. This was mostly English, with some Chinese and a few other imported ingredients. Pronunciation, however, remained predominantly Chinese, reflecting the locals’ difficulty with certain English sounds.

These then had to be learned in reverse by the native anglophones. The classic example was the word pidgin itself: the nearest Chinese approximation to the word “business”.

Not much else of this original Business English remains today, although there is one other still-common phrase, and it’s a useful one, conveying as it does the need for urgency. It could apply, for example, to Irish preparations for a hard Brexit. Equally, it could be used to emphasise the need for us to fill the EU’s anglophone vacuum before the Dutch grab everything.

Either way, the message is “chop-chop”.