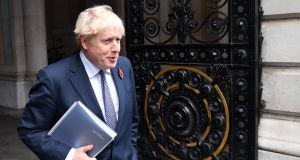 Winston Churchill famously claimed in 1922 that, as the floodwaters of the first World War began to recede, “the dreary steeples of Fermanagh and Tyrone” emerged again as the only thing left unchanged by the great cataclysm.

But now, as the aftershocks of the political upheavals of 2016 – Trump and Brexit – begin to diminish, Ireland’s place in the world does not seem either dreary or unaltered.

7 Coronavirus: What’s allowed and what to avoid this Christmas

8 ‘It’s finally got to rural America’: Covid-19 surges in the Dakotas

16 How technology and social media is undermining family relationships

17 Brian Kerr: ‘The uncertainty, lack of support from the FAI, it was a dark time’

21 The Offload: Shane Horgan pulls no punches as the podcast wars rage on

22 Yungblud: ‘My generation is over being divided’

25 Viggo Mortensen: It ‘felt awkward’ replacing Stuart Townsend in Lord of the Rings

26 Helena Bonham Carter: ‘People choose to sleep with powerful people. I got two children out of it’

29 WHO warns about risks of ski holidays and Christmas gatherings

30 Exiting Level 5: What will be allowed from December 1st?

33 The Irish Times view on an assassination in Iran: taking advantage of the US transition

36 Man who stole more than €95,000 in social welfare under false names jailed

40 Ryan Tubridy swears he dropped a B-bomb, not an F-bomb, on Late Late Toy Show