Fear of losing is holding Varadkar and Martin back 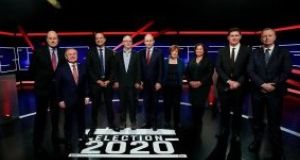 “Three live television debates and a flurry of manifestos have left many voters bored and uninterested.”

Election 2020 has failed to ignite the public imagination. Three live television debates and a flurry of manifestos have left many voters bored and uninterested. If it continues like this, a very low poll is likely. There is demonstrable evidence that the public attitude is for change – and for a change of government – but none of the Opposition parties have come up with a compelling consumer offer. No single policy offering sticks in the mind. If it is mind-numbing auction politics, there are not too many hammers banging in the auction room.

While the Government peddles a message of Brexit success and a thriving economy of robust growth rates, this message is negated by stories of homelessness, queues for new, price-inflated houses, and punitive rents in Dublin that eat up modest incomes. In this election the old cliché – it’s the economy, stupid – has been replaced by a more profound neurosis as to where Irish society is heading. A sure sign that a government is becoming out of touch is when ministers are busy retailing facts and figures about the economy. We in Fianna Fáil did a lot of that prior to 2011. The government bubble often presumes people live in an economy rather than a society.

The only bit of showbiz in the television campaign has been introduced by Sinn Féin leader Mary Lou McDonald, who has injected a bit of passion into her contributions. The leaders of the two big parties, Leo Varadkar and Micheál Martin, have been playing it softly, clearly pumped up by advisers not to go out on a limb and trade serious blows with each other. There is a technocratic or managerial policy feel to their debate style. Martin and Varadkar seem frozen by caution, afraid that one wrong utterance could cost them the election.

Canvassers say freezing cold, fear of crime and apathy mean sometimes 50 per cent will not bother coming to the door during the night-time canvass

The fact that a small country like Ireland can have election debates that features no fewer than seven party leaders tells its own story of political fragmentation, ego and disenchantment with the two big parties. The last time I saw something like this was the tussle to gain the Republican nomination in the US when Donald Trump won. There were 16 candidates on display when the television lights came on. Hopefully election 2020 will see the voters cull the number of party leaders we need to see in this rather pantomime version of politics.

On the doorsteps in Mulhuddart last week the issues of urban decay, urban housing, health and street crime featured among voters’ anxieties. In the local authority houses visited during the daytime canvass, there was a sense of neglect and abandonment.

Canvassers say freezing cold, fear of crime and apathy mean sometimes 50 per cent will not bother coming to the door during the night-time canvass, even though the lights are on and people are at home. Burglaries in the better-off areas of the constituency mean padlocks are appearing again on people’s gates.

The most visible sign of the times and of the presence of drug crime was two hooded young men smoking weed while chatting on the street. Naturally there was zero interest in the election when the lads were asked if they were likely to vote. The sheer openness of Ireland’s drug problem still comes as a bit if a surprise to me. Election 2020 started with the dismemberment of a young man in Drogheda but there is a palpable lack of alarm from the political parties.

In the election of 2016 there was a gangland gun attack in the Regency Hotel in broad daylight and despite public outrage, none of the political parties made it the central issue of the campaign. It is as if they have become used to and accepting of the fact that we have some of the worst drug addiction rates in Europe, with attendant gangland murder and feuding. It is only a matter of time before this feeds into the narrative of the country which cannot be good for our investment reputation.

The result of this election will be decided by events in the last week. Public opinion has yet to settle. The big unknown is who will be the beneficiaries of the slide in Fine Gael’s support. The elephant in the room is how Fine Gael and Fianna Fáil will deal with Sinn Féin after the election. The latter has successfully exploited its exclusion from the head-to-head television debates between Varadkar and Martin and also – apparently – its exclusion from a future coalition deal. Despite the party’s standing in opinion polls, however, if the results of the local elections are any guide, Sinn Féin will its work cut out retaining its existing seats in the Dáil.