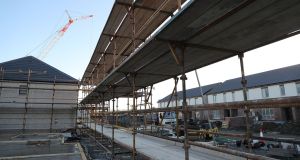 The roots of the housing crisis are deep – stretching back before the great economic crisis – and so making progress in tackling it is difficult. Photograph: Nick Bradshaw

Not surprisingly, the housing crisis has been a dominant issue in the election campaign so far. From homelessness to record rents, unaffordable homes and inadequate supply, its negative impact is writ large across society. The roots are deep. They pre-date the great economic collapse and that makes progress difficult. The race for votes has fuelled the debate and prompted political parties to set out their stalls, even if an election campaign is a suboptimal context to bottom out arguments. Indeed much of the discussion has centred on short-term measures, many questionable.

In seeking solutions, the advances that have been made and the huge challenges that remain need to be recognised. Housing supply has improved although it is still well short of what is required. The Government has set out a programme for using public land, via the new Land Development Agency, which has potential. There has been some increase in social housing provision but shortages in this category are particularly damaging. Across all agencies involved, the housing crisis now has priority. Yet progress is often too slow and, in some cases, policy seems to pull in different directions.

The scale of the challenge is also clear. Whoever wins the election, massive amounts of State money will be spent on housing in the years ahead. As well as ensuring this investment can continue, even if economic growth slows, the key task will be guaranteeing capacity to deliver – across industry, local authorities and all relevant agencies – and actually making it happen. And ensuring value is obtained for the cash spent.

It is hard to overstate the complexity and the degree of co-ordination needed across public and private sectors. Nor is it a time for orthodoxy. Debate and argument is necessary – and welcome in an election campaign – but so too is a timely conclusion that commands broad agreement. The Sláintecare model for development of the health service could offer a map forward but only if it is accompanied by a genuine commitment to delivery which is lacking in that case.

A big change is planned in policy direction by the outgoing Government towards a denser development model. This underlies its housing and spatial plans – and infrastructure investment – and whoever takes office is likely to continue in this general direction, even if the political parties differ on how best to proceed.

Moving in this direction has big implications for policymakers, planners, the industry and, in particular, homeowners. It requires new approaches to long-term rental as well as a clear vision of how and where the next generation of homeowners will live. Land and property development, driven over the years by speculation, bubbles and crashes, needs to move into a new era where the public good trumps all vested interests.