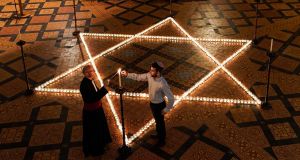 The Reverend Canon Dr Christopher Collingwood, Canon Chancellor of York Minster and Joshua Daniels from University of York Jewish Society light some of the 600 candles shaped as a Star of David on the floor of the Chapter House of York Minster as part of a commemoration for Holocaust Memorial Day last Thursday. Photograph: Ian Forsyth/Getty Images

Ever since the liberation of Auschwitz by the Red Army in 1945, opinions have diverged on whether the Holocaust should be commemorated as a singular historical horror or used as a reference point for the present day.

As the number of survivors has declined and that direct human connection to the death camps has weakened, the act of remembering the 1.1 million people who were murdered at Auschwitz, most of them Jews – and the six million Jews killed in the Holocaust – has become ever more intertwined with contemporary politics.

Yet it is vital on this, the 75th anniversary of the Auschwitz liberation, that we find ways to remember the Shoah and its historical specificity while at the same time absorbing the lessons it offers a continent where intolerance, and anti-Semitism in particular, is shamefully resurgent. That requires us to dwell on the indifference, the hatred, the standing by – and ultimately the collaboration – that allowed Auschwitz to happen.

It requires us to remember that this system of industrialised murder was conceived and run not by a faceless bureacucracy but by people – people who made their own decisions and were responsible for the horrors they committed or allowed to occur. And it requires us to acknowledge that remembering the hell on earth at Auschwitz – the gas chambers, the torture, the cattle wagons – is not an end in itself but a call to action and a requisite step towards that moral imperative, Never Again.

“Holocaust recognition is our contemporary European entry ticket,” wrote the late historian Tony Judt. To be European today, in other words, is to be acutely conscious of the barbarism that gave birth to the continent as we know it today. But that awareness is for nothing without a determination to act on it.

And so we stand shoulder-to-shoulder with those Jews who feel in any way unsafe or threatened in Ireland, France, Britain, Germany, Hungary or anywhere else. We speak up against racism and intolerance. And we defend with endless vigour those core EU values – humanity, rule of law and fundamental rights - against those would challenge them.