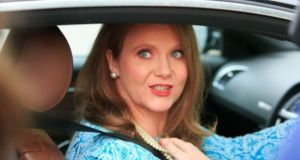 Fine Gael Senator Catherine Noone: It is a very serious matter that a politician would participate in ableism, especially, and this bears stressing, while trying to convince voters to back her.File photograph: Gareth Chaney/Collins

Acknowledging that he can come across as cold or stiff, her way of putting it was: “He’s autistic like, he’s on the spectrum, there’s no doubt about it. He’s uncomfortable socially and doesn’t always get the in-between bits.” When reports emerged this might not have been the only time she made such remarks while canvassing , The Times approached her for comment.

“I didn’t mean it in the sense of the actual illness or anything,” she told them. “I just mean he can be a bit wooden and lacking in empathy. I shouldn’t have even said it in that way,” she said. The senator then went on to offer examples of other words that could be considered offensive when taken out of context, such as “special” or indeed, the N-word. A serving senator, in attempting to justify casual ableism, casually said a racial slur to a journalist she knew was recording her. At least shortly afterwards, she conceded “it was a bad example”.

There is a lot to unpack there. She wasn’t claiming her party leader had a literal autism diagnosis. That could have been less offensive than her active participation in patronising tropes, using “autistic” as a jab at his shortcomings.

As an autistic person, I know too well this use of my medical condition as a pejorative swipe at someone’s personality. This tired stereotype that autistic people have no empathy has been debunked so many times, it’s boring to go over it again here.

It is a very serious matter that a politician would participate in this, especially, and this bears stressing, while trying to convince voters to back her. But the way she built gaffe upon gaffe, gave the quite ironic impression that she was out of touch with society’s cues; that she had no filter. It sounds like this has been an embarrassing situation for Senator Noone ; to be so judged for her struggles to communicate. Arguably, this experience could improve her empathy towards autistic people, which has been sorely lacking.

It is callous to use any social group’s name so casually, when discussing a character flaw. Autistic people are bombarded with character judgements against our behaviour, from a young age, reinforced by stereotypes that do not reflect our diversity. There are even autistic people who feel safer not to disclose their diagnosis.

What could possibly make them feel that way, one may ask? A society where a national politician can be tasteless about autism, while canvassing voters perhaps?

The conflation of autism with bad personality traits is something autistic people have long faced. Catherine Noone has brought this out in the open. Even though she has apologised for her now-retracted remarks, they show how far society has to go in accepting the humanity of autistic peopleas a a given.

Let’s take this as an opportunity to listen to autistic voices, break down misconceptions and stop assigning our supposed “traits” to things that have no connection to us.

We should also examine the concept of empathy and why else Leo Varadkar could be seen to lack it. There is a coldness in how many politicians assess the grave challenges of, say, the climate crisis, the housing crisis, or even providing support for autistic people and decent mental health services for all.

There is a detached incrementalism in response to many issues that falls short of the urgency and ambition needed for a humane outcome. This comes from a supposedly learned and responsible political class, some of whom have been known to list slurs as their way of defusing a tough interview.

If election candidates are to be assessed partly on empathy, and the role it plays in governing, then let us have a deeper consideration of why empathy matters and how best we can act on it.

Jonathan Victory is a writer and filmmaker living in Dublin.

1 Varadkar remains in caretaker capacity after Dáil fails to elect new taoiseach
2 L’Ecrivain, Derry Clarke’s Michelin-starred Dublin restaurant, to close after 31 years
3 ‘Manchester United are lucky to have you’: Klopp responds to Donegal schoolboy’s letter
4 Knock gets visit from world’s largest passenger plane
5 Would you kill one person to save five? Depends if you’re a millennial or not
Real news has value SUBSCRIBE