The Irish Times view: Prelude to a US troop pull-out from Afghanistan 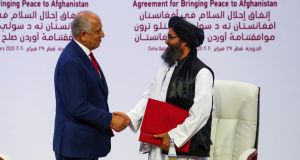 Mullah Abdul Ghani Baradar, the leader of the Taliban delegation, and Zalmay Khalilzad, US envoy for peace in Afghanistan, shake hands after signing an agreement at a ceremony between members of Afghanistan’s Taliban and the US in Doha, on Saturday. Photograph: Ibraheem al Omari/Reuters

In truth the peace deal signed by the US and the Taliban is more to do with US withdrawal of its 12,000 troops than it has to do with peace in Afghanistan. For Donald Trump, what matters in election year is evidence of a foreign policy “success”, proof above all that he is fulfilling his promise to withdraw US troops from abroad.

“A peace agreement that enables withdrawal,” is how Zalmay Khalilzad, the veteran diplomat leading the American peace efforts describes his attempts to end the two-decades-long war which began as retaliation for the attacks of 9/11.

Like the recently unveiled US plan for Israel/Palestine, there is little confidence among international observers that such vaunted Trump initiatives provide a real basis for sustainable political settlement of intractable conflicts. But they will sell back home.

Not surprisingly there was little cheer in Kabul following the announcement in Doha that a deal had been done. The Afghan government was excluded from the talks and although the Taliban promises to stop attacks on US troops, it has not agreed to a ceasefire with Kabul. That will come only with the promised internal talks about accommodating the Taliban in the government of the impoverished country.

The full US withdrawal within 14 months is conditional on the maintenance of the ceasefire against US troops and their Nato allies, and a clear repudiation by the Taliban of its accommodation of al-Qaeda, specifically its use of Afghanistan as a base for attacks. It also involves prisoner releases on both sides.

Much of the negotiations happened in a year of record violence from both sides. In the past five years, more than 50,000 members of the Afghan security forces have been killed, and tens of thousands wounded. The Taliban’s losses are harder to verify, but their casualty rate is put by the New York Times at a comparable level. Out of about 3,550 Nato coalition deaths in Afghanistan, nearly 2,400 have been Americans.

It took two years from Richard Nixon’s 1973 peace deal with North Vietnam to the ignominious final departure of the US and the fall of Saigon to the North. Is history repeating itself? The US-led attack on Afghanistan, “Operation Enduring Freedom”, began on October 7th 2001. “Enduring War” might have been more appropriate. Freedom in the battered country, not least for women, and the promised democratic institutions, have singularly failed to take root.

Afghanistan has again proved itself unforgiving terrain for foreign powers, whether Britain in the 19th century, Russia, or now the US. But Taliban boasts of a victory against the US ring as hollow as Trump’s own claims. A long drawn-out and costly battle, with much unfinished business, would be a more accurate assessment.