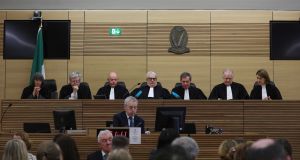 Quietly, the Supreme Court has been undergoing some major changes. The establishment of the Court of Appeal in 2014 paved the way for a redefinition of the Supreme Court, which would in future hear only the most important cases. That process of redefinition is a work in progress – only last year did the Supreme Court manage to clear its huge backlog of legacy cases, according to its latest annual report – yet, gradually, the character of the reshaped institution has been emerging.

On the law, it has been a creative place willing to explore new approaches – as it did in introducing the concept of suspended declarations of invalidity, where the court signals it is to strike down a law as unconstitutional but delays doing so in order that the State and others can prepare for the result. That has been liberating for the court and was put to useful effect, for example, in the landmark 2017 finding that the complete ban on asylum seekers working was unconstitutional. There have been other positive changes. Today, four of the nine judges on the court are women. And in a legal world that has been so often resistant to technology, the court now enabling parties to lodge papers electronically (even if take-up has been “disappointing”, as the annual report puts it).

One of the most striking changes has been the opening-up of the court. Under Chief Justice Frank Clarke, the court has sat in cities across the State (it was in Waterford this week), it has allowed television cameras in for the first time (albeit in limited circumstances) and it has undertaken outreach with schools and communities.

A key challenge for the superior courts now will be to ensure that the bottleneck at the apex of the system is not merely transferred from the Supreme Court to the Court of Appeal. But the clearing of the backlog is clearly very good news for the court and for the people who need to use it. It should enable the next government to begin the process of reducing the court’s membership, expanded in recent years to deal with the extra workload. That would help to give more consistency and cohesion to a vital institution.