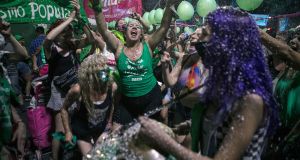 Pro-choice protesters dance outside the National Congress as senators decide on the legalization of abortion on Tuesday in Buenos Aires, Argentina. The proposal authorises legal, voluntary and free interruption of pregnancy until the 14th week while allowing doctor’s conscientious objection. Photograph: Ricardo Ceppi/Getty Images

The decision by Argentina’s senate to legalise abortion marks a major advance for women’s rights in Latin America and the Caribbean, home to some of the most restrictive reproductive health laws in the world.

Before yesterday’s vote to allow terminations up to the 14th week of pregnancy, only in Cuba, Guyana, Uruguay and parts of Mexico did the region’s women have the right to choose. The overwhelming majority instead live in countries with minimal access to abortion, which is typically restricted to cases of rape or where the life of the mother is at risk. In six nations the procedure is not allowed under any circumstances.

Yet despite these prohibitions abortion is a reality across Latin America. Millions are carried out clandestinely each year. For the well-heeled there are discreet clinics in large cities offering a relatively safe service. But the poor majority seeking a termination must take their chances with backstreet abortionists. It is from among these women most of the 760,000 annual hospitalisations due to complications from unsafe procedures are drawn. Many lose their lives. In Argentina over 3,000 women have died from botched abortions since the return of democracy in 1983 while 39,000 are left hospitalised each year. President Alberto Fernández was right when he said abortion is already a reality in his country and the question is in reality one of social justice.

Fernández deserves credit for his government’s proactive role in the push to decriminalise. But this is ultimately a victory for Argentina’s women’s rights movement. Its 15-year long pro-choice campaign, itself the product of decades of mobilisation and organisation by feminist activists, has delivered a hugely significant breakthrough with wider implications for a region in which Argentine society exerts significant social and cultural influence. Women’s rights activists across Latin America and the Caribbean will draw strength and inspiration from this success as they wage their own long campaigns against what remain formidable legal, political, religious and cultural obstacles.