The Irish Times view on the risk of a hard Brexit: Dublin’s dilemma on the Border

There may be scope to negotiate how and where checks take place, but not the fact that they are needed 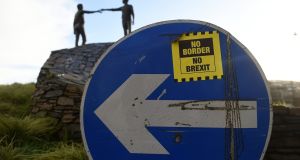 A ‘ No Border, No Brexit’ sticker is seen on a road sign in front of the peace statue entitled ‘Hands Across the Divide’ in Derry. Photograph: Clodagh Kilcoyne/Reuters

What happens with the Irish Border in the event of a no-deal Brexit? On one level, the comment by a European Commission spokesman that it was “pretty obvious” that border controls would be needed was little more than a reflection of what most people have thought. On another, however, the timing was interesting. Was it a slip, or was it a reminder from the commission of the vital interest it sees in protecting the EU’s single market?

The intervention from Brussels has led to much discomfort in Dublin, both publicly and privately. Senior Government figures have been playing with words, trying to protect their tactical position and to keep their options open in the event of a no-deal. EU chief negotiator Michel Barnier also rowed in, saying that if there is a no-deal Brexit, the commission will work with Ireland and the UK to ensure the necessary controls and checks are made without putting a border back in place.

While Barnier’s comments show a sensitivity to the Irish situation and to the particular objection to border infrastructure, they also reflect the reality that controls and checks will be needed. A no-deal Brexit will leave the North in a different customs and regulatory regime and there cannot be an open gateway via the Republic into the EU’s single market. There may be scope to negotiate how and where the checks take place, but not the fact that they are needed.

There is no obvious or clear route to avoiding checks and controls – a trade border – on the island in the wake of a no-deal Brexit. It could be achieved by the North remaining in the EU trading bloc, or through the wider UK-wide backstop set down in the withdrawal deal. But as the backstop has been the main reason for the House of Commons’s objection to the withdrawal agreement, the revival of it in some form after a no-deal exit looks unlikely.Any suggestion of Border checks between Ireland and continental EU economies would cause huge economic damage, effectively placing us outside the EU single market.

In the medium term, it is difficult to know what would happen. Some expect that such would be the chaos of a no-deal that the UK would come back to the EU quickly looking for an agreement. Howeverwe cannot rely on this happening.

For now we must await developments in the House of Commons and hope that a no-deal Brexit is avoided. If the opposite is the case, the Government will be in a near-impossible position, trying to balance our economic and political interests.

In the meantime, the Government needs to be careful – any suggestion that there is a clear route to avoid border controls after Brexit will only encourage the Brexiteer lobby, who will argue that if this is the case, then where is the problem. And it must remain insistent that the EU retains a central role, as this issue cannot somehow be worked out between Dublin and London.