The Irish Times view on Soloheadbeg: a complex legacy 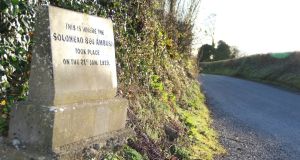 The Soloheadbeg ambush, in which two policemen were shot dead by a group of Volunteers led by Dan Breen and Seán Treacy, has left an ambiguous legacy. Photograph: Ronan McGreevy

Centenary commemorations took place this weekend to mark the opening shots at Soloheadbeg in Co Tipperary of what became known as the War of Independence. The event was controversial at the time and there are still divided views about its justification.

The main focus of the State commemoration is the 100th anniversary of the first Dáil which met on January 21st, 1919, the same day as the ambush. That is only right as the first Dáil was the foundation stone of the democratic state we inhabit today.

By contrast the Soloheadbeg episode in which two policemen were shot dead by a group of Volunteers led by Dan Breen and Seán Treacy has left an ambiguous legacy. The War of Independence accelerated the process by which the Dáil was recognised by the British as the legitimate government of an independent Irish State. The downside was a litany of violence and the cult of the gunman which has echoed across the century.

In January 1919, the killing of Constable James McDonald, a native Irish speaker from Belmullet in Co Mayo and a widowed father-of-six, and Constable Patrick O’Connell from Coachford in Co Cork, was widely condemned. An editorial in The Irish Times described it as “a hideous crime”.

Aside from the brutality of the killings, the absence of any form of authority for the action troubled some members of the Dáil, who feared that the armed wing of the independence movement might not be amenable to political control.

After independence, initial doubts about the legitimacy of the Soloheadbeg killings were forgotten and, largely due to Breen’s 1924 book My fight for Irish Freedom, the ambush was accepted as the opening salvo of the War of Independence.

In recent decades a more nuanced view has developed. This has been reflected in the annual commemoration in recent years at which the police victims are prayed for as well as the Volunteers who took part in the ambush. In keeping with that approach, it was appropriate that yesterday’s State-sponsored commemoration reflected the episode in all its complexity.

1 Miriam Lord: Minister for Agriculture tries to get himself out of the manure
2 Storey funeral highlights fundamental problems with Sinn Féin
3 239 experts with one big claim: Coronavirus is airborne
4 Irishman in Philadelphia: Mass protests across the US felt inevitable
5 Skeletal remains discovered in south Dublin were of man missing since 2011
Real news has value SUBSCRIBE