The Irish Times on Congo’s election: turning a blind eye

By accepting a dubious outcome, DRC’s neighbours and the West are storing up problems for the future 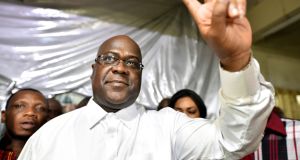 First the good news. When Felix Tshisekedi is inaugurated as president of the Democratic Republic of Congo (DRC) in Kinshasa today, it will be the country’s first democratic transfer of power since independence from Belgium in 1960. Widespread fears in advance of last month’s election that it would set off violent confrontations have not, so far at least, been borne out. While all of that implies progress, however, none of it should obscure the serious questions that surround the electoral process or the lamentable willingness of many African powers to overlook those questions.

Tshisekedi narrowly defeated another opposition leader, Martin Fayulu, in the December 30th ballot, but Fayalu insists he secured more than 60 per cent of the vote. Independent observers have also pointed to major problems with the election, including faulty voting machines and polling stations where many people could not vote. What appear to be leaked results from the electoral commission suggest Fayulu won comfortably.

None of that appeared to concern the constitutional court, which confirmed Tshisekedi as the winner last weekend. Nor does it seem to trouble many of DRC’s neighbours, many of whom have congratulated Tshisekedi. The African Union and the EU have issued largely tepid responses, but neither has challenged the outcome.

The DRC faces huge challenges, from developing the economy to stamping out militia violence along its eastern borders. It badly needs an injection of energy and new ideas. But while Tshisekedi is nominally an opposition figure, the ruling coalition of outgoing president Joseph Kabila won a majority in the National Assembly. Fayulu, a businessman who has been outspoken about the need to address corruption, accuses Tshisekedi of having struck a backroom deal with Kabila and says a Tshisekedi presidency would amount to a continuation of the current regime.

DRC’s neighbours, and the West, seem willing to hold their noses if it buys them a degree of stability in one of Africa’s biggest countries. In fact they are just storing up problems for the future.