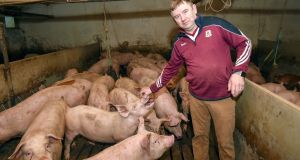 “The worst-case scenario is a hard border, and people won’t accept that.” Frank Brady at his pig farm in Cootehill, Co Cavan. Photograph: Philip Fitzpatrick

When Border farmer Ossy Hughes gets up in the morning, he has a choice: should he tend his beef cattle in the Republic of Ireland or his dairy herd in Northern Ireland?

It’s all the one farm, but the choice is there nonetheless.

The reason is that the land comprising the Hughes farm straddles the Border. For about 7km along the Monaghan-Armagh frontier, the constitutional reality of two jurisdictions is demarcated by the meandering flow of the river Cor.

Where the N12 Monaghan to Armagh road enters Northern Ireland at Middletown and becomes the A3, it passes over the Cor, as does the Hughes farm at the same location.

The daily reality of what this means was made apparent to no less a figure than MEP Guy Verhofstadt – former Belgian prime minister and current chief representative for the European Parliament in the Brexit negotiations – when he came to the Hughes farm in September 2017.

He tweeted a photo of himself standing on a Hughes farm boreen in the rain.

“A visual demonstration of this complicated & inexistent border: brown field is in the Rep of Ireland & the green field is in N. Ireland,” he wrote.

Ossy Hughes rues the complete lack of progress since then as to what sort of Brexit, if any, is set to emerge on March 30th.

“Since that day, the can has been kicked down the road,” he says.

For very many farmers on both sides of the 500km Border – which separates, on the southern side, Donegal, Leitrim, Cavan, Monaghan and Louth, from, on the northern side, Derry, Tyrone, Fermanagh, Armagh and Down – what worries them most right now is the uncertainty.

They simply do not know what the immediate future holds and under what set of rules and regulations – trading tariffs, veterinary, fiscal and environmental – they will have to operate when, and if, Brexit happens.

The practical implications are acute for Ossy Hughes, his wife, Laura; and their six children. Ossy’s house is in the South; his mother’s is in the North, both of them on the one farm.

Coming from his mother’s hilltop bungalow, a small road on the farm comes to a crossroads named Ward’s Cross – “straight ahead and right in the South, left is the North”, says Ossy – to illustrate the extent to which his family’s land is interwoven with the Border.

The Hughes farm is a cattle farm. It comprises about 150 acres in the south and, on the other side of the river Cor, 100 in Northern Ireland. Ossy has about 70 dairy cattle on the northern side of the Border and 230 beef cattle in the South.

A visual demonstration of this complicated & inexistent border: brown field is in the Rep of Ireland & the green field is in N.Ireland pic.twitter.com/iENALd1Ya5

He sells his milk to the Lakeland Dairies co-op in Monaghan and his beef at Markethill mart in Armagh (where it is usually bought for slaughter in Clones, Co Monaghan, or Ballyjamesduff, Co Cavan, the Border being, essentially, irrelevant to the business practices of all concerned).

It is the nitty-gritty practical implications of two separate regulatory regimes emerging on either side of his farm that concern him.

“What will it mean if I cut silage in the South to feed cattle in the North?” he asks. “Is there going to be Border checks on silage cutting?

“Is there going to be two different animal health regimes? Do I need two vets now? If I’ve a cow calving and I ring the vet in Monaghan but he can’t get to me for two hours because of queues and Border checks – it’s the little, wee things that if taken away from me that are going to make a big difference.”

Down below the farm at the bridge where the N12/A3 crosses the Border, Ossy’s father, Sean, runs a small filling station and large Costcutter supermarket. Immediately opposite is a reminder of times past – an abandoned customs post with an awning that sticks out over the road to give some shelter to the customs officers who would stand to check vehicles crossing.

Since the Belfast Agreement and the virtual disappearance of the Border, people have got used to things are they now are.

“We were used to checkpoints and road blocks, but we got on with it,” he says of the past. “It seems alien to have to go back to that ...”

Frank Brady, the Monaghan chairman of the Irish Farmers’ Association (IFA), says people in Border areas – north and south – simply will not accept the reintroduction a hard border.

Brady runs a substantial pig farm near Cootehill, Co Cavan, with a little help from four employees and his boxer dog, Gizmo. It is a serious business for which Brady has significant qualifications, including third-level qualifications in commerce and biomedical engineering, and pig-farming experience with Kerry Co-op and in Australia and New Zealand.

His Cootehill operation – an interlocking network of concrete walkways and pens spread out over about four acres where pigs are fed by a computer-controlled delivery system – involves about 700 animals with an output to market of about 360 per week.

Brady breeds – he jokes that he runs the business “from erection to resurrection” – in several stages.

Stage one is from birth to four weeks, during which piglets remain living with their sow and are fed a milk diet. In stage two the young pigs are fed a high-grade diet of barley and soya for a further four weeks.

Stage four is when, at about 24 weeks, the pigs are sent for “processing” – slaughter – usually to Edenderry, Co Offaly, as opposed to Cookstown in Co Tyrone, which is where many Border pig farmers send their stock.

The animals spend their lives indoors, where the air is pungent but they are warm, although they have minimal natural light.

They appear well-treated and scamper over to Brady when he appears by the pens, where they have plenty of room to walk, for him to rub their noses, which seems to please all concerned.

“Around 8,000 pigs per week from the South are slaughtered in Northern Ireland,” he says, “and about 8,000 sheep per week come from Northern Ireland into the South for slaughter. Rosderra [the Republic’s largest pig processing company] kill over 50 per cent of the pigs in Ireland. If all the pigs currently going north had to be processed in the South, we don’t have the capacity.

“The sheep factories [in the South] won’t have enough throughput to keep going if there’s a hard border and it’s cheaper for northern farmers to send their sheep to the UK for slaughter.”

Brady buys lorry loads of feed (costing about €35,000) from the Fane Valley Co-op in Omagh and he sees huge problems for agriculture and food processing if a hard border is introduced, with inevitable delays on the ground, to say nothing of tariffs and regulatory divergences involving feed, and veterinary and environmental standards that could emerge between an EU Republic and non-EU Northern Ireland.

The cream for Baileys crosses the Border six times, he says, on the way to being processed into the popular cream liqueur. He says milk lorries from Lakeland Dairies co-op used by Ossy Hughes make 10,000 Border crossings a year.

Taking out a calculator, he computes, on the basis of a notional 20-minute Border delay per lorry, nine hours a day lost to the company.

Irish pig farmers are already hurting, as the IFA make clear on Friday in a statement noting that production costs of €1.60 per kilogram of meat produced has to be set against just prices paid at slaughter of €1.30 to €1.42.

“This equates to a loss of over €16 on every pig produced,” said IFA pig committee chairman Tom Hogan.

Frank Brady says the relentless drive to have cheaper food on the supermarket shelf is pricing producers out of business.

“When I started, a sow produced nine piglets after 16 weeks’ gestation. Now we get 13 or 14 pigs per gestation,” he says. “All that has been done to make food more affordable [but] food is now too cheap and is not respected.”

From Brady’s point of view, the last thing he and other producers need is Brexit-fuelled cost increases, Border chaos and regulatory divergence all pushing producer costs up but meeting consumer unwillingness to pay higher prices in the shops.