The Irish Times view on the Kevin Lunney attack: shaking off the fear

In a community where the mantra ‘whatever you say, say nothing’ endures, it takes courage to call out criminality and intimidation for what it is 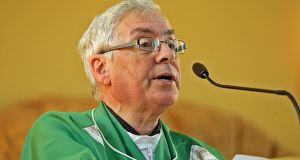 Fr Oliver O’Reilly condemned the appalling treatment of Kevin Lunney by “a local Mafia-style group with its own godfather”. Photograph: Lorraine Teevan

The establishment of an armed Garda Síochána unit for the Cavan border area, following the abduction and torture of Kevin Lunney, a senior executive at Quinn Industrial Holdings (QIH), two weeks ago, reflects the seriousness of the threat to law and order. In a community where the mantra “whatever you say, say nothing” endures, it takes courage to call out criminality and intimidation for what it is. But the parish priest of Ballyconnell, Fr Ollie O’Reilly, did that when he condemned the appalling treatment of Mr Lunney by “a local Mafia-style group with its own godfather”.

The priest’s homily from the altar received general applause. But he was criticised by a number of locals and was later warned to “mind himself”. As on earlier occasions, local people – while deploring the dreadful treatment of Kevin Lunney – were fearful and unwilling to be identified. There are indications, however, that border communities are beginning to shake off this fear. A public march in support of Lunney and of other threatened executives at QIH was a new and significant departure. Similarly, enthusiastic support for the establishment of the armed garda border unit by Brendan Smith, a local Fianna Fáil TD, offered important cross-party cohesion.

Smith told RTÉ that a reduced level of policing in border areas, following the Belfast Agreement, had resulted in the emergence of criminal gangs. They were now actively engaged in intimidation and bombing incidents, he said, and there could be no question of returning to the violence of the past. Such outspoken rejection of criminal elements is both welcome and encouraging in the context of a hard Brexit.

An estimated 70 incidents of damage and intimidation have taken place at various companies since Sean Quinn’s business empire fell apart in 2011. Following a restructuring in 2014, new management was installed and Quinn was temporarily employed as a consultant. It didn’t last.

Earlier this year, five directors were threatened with a “permanent solution” if certain business decisions were not reversed. Quinn has strongly condemned these incidents and expressed outrage following the attack on Lunney.

The people who kidnapped and tortured Lunney were, according to Fr O’Reilly, criminal elements who had been recruited and paid by a local godfather. The “dogs in the street”, he said, were aware of that individual’s identity. He himself had remained silent for years in the hope that the threats and intimidation would peter out.

This latest escalation and threats to life meant, however, that parishioners could no longer ignore what was going on. People had to confront a “false narrative” that the directors of QIH were “usurpers”. They were, he insisted, hard-working individuals who had increased employment at the company.

1 Ireland among countries urged to consider reinstating Covid-19 restrictions
2 Lowest numbers in two weeks as one more Covid-19 related death and 35 new cases reported
3 Ward at Naas General Hospital closed due to suspected Covid-19 outbreak
4 Government begins work on new medium-term plan for Ireland in Covid-19 era
5 ‘I’ve been sleeping with my girlfriend’s sister. I need help. What do I do?’
Real news has value SUBSCRIBE