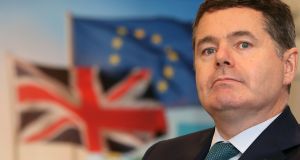 Minister for Finance Paschal Donohoe has said that he intends to present one budget package, including special spending measures aimed at vulnerable sectors, which would only come into play in the event of a no-deal Brexit. Photograph: Niall Carson/PA Wire

Economic forecasting is a precarious art at the best of times. Now, with uncertainty over both the timing and nature of Brexit, it is impossible to predict with any confidence the prospects for the economy next year. However the latest Economic and Social Research Institute (ESRI) report carries two important messages about the general outlook.

The first is that a no-deal, disorderly Brexit could hit the economy with a sharp shock, potentially pushing it into recession next year. Like all the other forecasts of a no-deal impact, this needs to be treated with some caution, given the uncertainties involved. However, it is the most pessimistic to date from the major forecasting bodies and does illustrate the extent of the risks facing the economy.

The second is that the domestic economy is already slowing, possibly partly due to Brexit nerves but also other factors. The economy is approaching full capacity and there is a slowdown in other major markets as well as the UK, notably Germany, and the threat of future trade tensions.

As the ESRI says, this makes drawing up the budget for 2020 a difficult exercise. Minister for Finance Paschal Donohoe has said that he intends to present one budget package, including special spending measures aimed at vulnerable sectors, which would only come into play in the event of a no-deal Brexit.

This is intended to avoid the need for any emergency budget in the event a no-deal comes to pass. The ESRI warns that some kind of special package early in 2020 could yet be needed. This will depend on how events play out, but the key issue is for the Government to be ready to put in place the required measures quickly if a no-deal does happen.

One of the unfortunate aspects of Brexit is that it has removed some of the focus from other key issues, notably housing. Here the ESRI warns, in line with other forecasters, that housing completions this year look likely to be lower than expected and well below the required 35,000 annual level.

The Government has taken a lot of policy actions in this area, and there has been some increase in supply, but a coherent long-term action plan and a pathway to get there still seem to be missing. In particular, the required urgency and co-ordination between all the key players is missing. As we head towards the next general election, this needs to be a key policy issue.

The Minister cannot put everything on hold in advance of the outcome of the Brexit process, but equally it would be ridiculous to ignore it. The economy has made significant progress in recent years in recovering from the crash, albeit with major problems like housing remaining. The job in the short term is to protect these gains as far as possible.

1 Cycling or swimming, walking or yoga: What is the best exercise for you?
2 ‘I’m not going to go into any more detail’ - Varadkar faces drugs question again
3 Chance of snow as Ireland set for cold snap from Sunday
4 A vegetarian and a non-drinker visit Ireland: here’s their verdict
5 ‘I get paid to learn. I couldn’t recommend it enough’
Real news has value SUBSCRIBE