The Irish Times view on morale in the Defence Forces: a step in the right direction 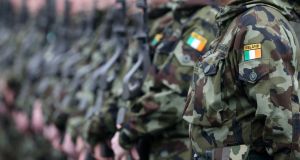 The number of people actively serving in the Defence Forces remains under 9,000. Photograph: Colin Keegan/Collins Dublin

Taoiseach Leo Varadkar has been given an opportunity to restore morale in the Defence Forces by the decision of the organisation representing officers to accept new pay proposals from the Government. Delegates at the annual conference of the Representative Association of Commissioned Officers (Raco) backed the €10 million pay package by more than a two-thirds margin on the understanding that it represents a step in the right direction.

The Taoiseach responded by saying that strengthening the Defence Forces will take time but expressed confidence that “we are back on track” following the vote by officers to accept the deal. More to the point, he said the Government was committed to building further on the pay package in the next public service pay deal.

It is to be hoped that the responsible decision of the officers and the Taoiseach’s clear acknowledgement of the need for further action at a later stage will lead to a resolution of the problems that have seen a steep and unacceptable decline in Defence Force numbers. The officers have placed their trust in Varadkar to take direct control of the situation from the Department of Defence, which has clearly proved inadequate to the task.

The unprecedented intervention of President Higgins in the controversy showed just how serious the position had become. As supreme commander of the Defence Forces, he felt compelled to say that it should not be too much to expect that members were paid an income sufficient for themselves and their families. The President made an important point when he said the conditions under which members of the Defence Forces served should be exemplary for other parts of society. Raco general secertary Commandant Conor King said the proof of whether or not the Government’s plan was succeeding would be seen in the figures for the strength of the Defence Forces on a month-by-month basis. That strength is almost 1,000 less than the establishment figure of 9,500. The restoration of the Defence Forces to full strength will be the ultimate test of the Government’s good faith.