The Irish Times view on Corbyn’s Brexit moves: Trying to have it both ways 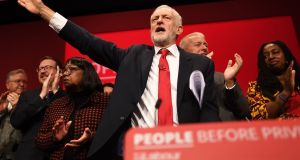 The outrageous behaviour of Boris Johnson over the past week has had the remarkable effect of making Labour Party leader Jeremy Corbyn sound like the voice of moderation in British politics. Photograph: Victoria Jones/PA Wire

The outrageous behaviour of prime minister Boris Johnson over the past week has had the remarkable effect of making Labour Party leader Jeremy Corbyn sound like the voice of moderation in British politics. It has also brought the warring factions in his party together even if their strategy to deal with Brexit seems as confused as ever.

Only a week ago it looked as if Labour could be torn apart over Brexit at its party conference in Brighton. To make matters worse Corbyn’s office made a determined but ultimately doomed effort to get rid of party deputy leader Tom Watson, a strong supporter of the UK remaining in the EU and an advocate of a second referendum.

The plot to remove Watson failed but the smile was quickly taken off the deputy leader’s face when the conference backed Corbyn and his Brexit strategy to the hilt. That strategy involves a complicated formula designed to appeal to leavers and remainers in the forthcoming election. In short Labour is proposing that if elected to office it will seek to negotiate a new Brexit deal with the EU within three months. That deal would be put to the people in a referendum within six months and voters will have the choice of endorsing it or voting to remain in the EU.

The problem with the Labour approach is that by trying to have it both ways the party does not have a clear message for the electorate about what it wants to achieve. The EU has been emphatic that the deal negotiated by former prime minister Theresa May, and rejected by Labour three times in critical votes in the Commons, is the only deal available. The most that will be offered by the EU is a refinement of the backstop so that, for example, it would apply to Northern Ireland only and not to the rest of the UK.

Given the clear positions held by the Conservative Party, which is now unequivocally for leaving the EU with or without a deal, and the Liberal Democrats, who are equally clear that they want to remain in the bloc, the Labour position will be very difficult to explain on the doorsteps. Instead of having it both ways the party could find itself falling between two stools.

It is a sad commentary on Corbyn’s leadership ability that faced with the most incompetent government in living memory – one led by a blustering bully who has taken one disastrous decision after another – the Labour leader continues to languish far behind his rival in the opinion polls.

Labour may take some comfort from the fact that they performed much better in the 2017 election than the polls had anticipated, but the party now has even more ground to make up.

Its message on Brexit will have to be much clearer if it is to have any chance of winning next time out. That will only happen if Corbyn begins to show real leadership on the biggest issue the UK has faced in a generation.

1 Rob Delaney: ‘As my career took off, my son got sick...then he died’
2 State subsidises public sector retirees to cover gap until State pension
3 Who are Ireland’s 17 billionaires?
4 52 places to go in 2020: Here’s where the New York Times says you should visit
5 Ipsos MRBI poll: Fianna Fáil edges ahead of FG as SF surges
Real news has value SUBSCRIBE