The Irish Times view on exhuming Franco: A battle over memory 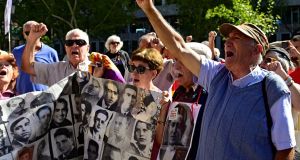 People shout outside the supreme court in Madrid last week as the court gave the green light for the Spanish government to remove the remains of Francisco Franco from a grandiose state mausoleum. Photograph: Javier Soriano/AFP/Getty Images

Opening a grave is always a troubling act. When the grave in question holds the remains of a dictator, still remembered warmly by a section of the population, it is a risky business as well.

Last week the Spanish supreme court dismissed objections by the family of Gen Francisco Franco to a decision by the Spanish government to remove his remains from the Valley of the Fallen. This is the grandiose mausoleum near Madrid, where they have lain since his death in 1975.

In 1936, Franco launched a military insurrection against the democratic, if unruly, government of the Spanish Republic. For the next three years, his forces terrorised ordinary Spanish people, village by village. Democrats, trade unionists and anyone who rejected his fascistic National Catholic ideology were targeted by his death squads. Rape was also employed systematically on occasions.

Multiple atrocities were also committed by Republicans during the civil war, but the legitimate government at least attempted to maintain the rule of law. Franco gave his followers free rein. His subsequent dictatorship suppressed all democratic freedoms. Opponents were routinely tortured and imprisoned. Spain’s transition to democracy in the 1970s had many positive features, but it failed to confront this toxic legacy. Instead, democrats accepted a “pact of forgetfulness”. That included leaving the bodies of some 30,000 victims of Franco’s gangs in unmarked graves.

For the last three decades, many Spaniards have agitated for “the recuperation of historical memory”. They faced, and face, dogged resistance from political conservatives.

It is most unfortunate that the proposed exhumation of Franco is being organised by a weak caretaker government, and occurs at a moment when Francoist nostalgia is enjoying an unprecedented revival, through the emergence of a new far-right political party, Vox.

The government has justice on its side. Whether it is wise to exercise that justice right now remains to be seen.