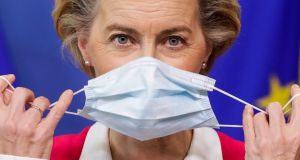 European Commission president Ursula Von Der Leyen at an event to mark the publication of the New Pact for Migration and Asylum at the European Commission in Brussels on Wednesday. Photograph: Stephanie Lecocq/AFP via Getty Images

In publishing only days after the devastating fires in Moria refugee camp its new Pact on Migration and Asylum, the European Commission is returning to a well-ploughed field. Aseries of similar, unsuccessful, migration reform attempts have been made since 2015. The purpose, says commission president Ursula von der Leyen , is “to restore citizens’ confidence in our capacity to manage migration as a Union”.

The commission will ask member states to approve a “comprehensive” approach based on two key pillars – a tightening of border controls through improved, faster health and security screening procedures, more efficient repatriations of those deemed ineligible for entry, and closer co-operation with and aid to originating states, on the one hand, and, controversially, a new mandatory system for sharing the burden of those admitted.

The pact, which should be in place from 2023, would put EU countries with external borders under closer monitoring to ensure they respect the right to seek asylum

The approach is familiar, reflecting a number of ad hoc or diplomatic initiatives made in recent years to overcome deadlock at the Council but, as Marissa Ryan, head of Oxfam’s EU office, complains “in its attempt to reach consensus, the Commission has bowed to pressure from EU governments whose only objective is to decrease the number of people granted protection in Europe”.

The pact, which should be in place from 2023, would, however, put EU countries with external borders under closer monitoring to ensure they respect the right to seek asylum and do not violate the law after multiple reports of pushbacks in Hungary, Croatia, Greece and Malta. People rescued at sea would have to be relocated in the EU, rather than be sent back, and the commission says member states should not criminalise charities involved in such rescues.

The commission is bringing back to the table a compulsory “solidarity mechanism” which in its previous incarnation of mandatory quotas for the relocation of successful asylum seekers to member states, had provoked a bitter deadlock, with states led by Hungary, the Czech Republic and Austria simply refusing to take in and share the burden of new arrivals from the frontline states.

The new package, a system of flexible contributions, circumvents their objections by allowing them to express their required solidarity either through relocation of asylum seekers from the country of first entry or by taking over responsibility for returning individuals with no right to stay or “various forms of operational support”, likely to be in the form of cash. States accepting relocated migrants would receive €10,000 per adult from the union budget.

Yet whether, even if agreed, the pact would end inhumane bottlenecks like Moria, effectively a prison camp for refugees, is far from clear. A small step, perhaps, but at a price also of continuing to turn a blind eye to the anti-immigrant posture of some member states.