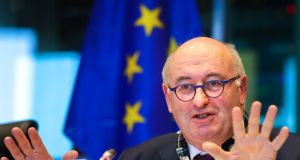 Is Phil Hogan, Ireland’s EU commissioner, and a central figure in both Brexit and global trade talks, a public official “too big to fail”? File photograph: Olivier Matthys/Bloomberg

The 2008 financial crisis introduced the idea of banks “too big to fail”. No matter how irresponsible or the degree of insolvency, it was argued that collapse was inconceivable. So they were bailed out while smaller fry went to the wall. Big boys’ rules.

Is Phil Hogan, Ireland’s EU commissioner, and a central figure in both Brexit and global trade talks, a public official “too big to fail”? Weighed against the possible damage to Ireland’s diplomatic interests, can his error in attending the Oireachtas Golf Society dinner, in breach of pandemic-related public health rules, as well as his unconvincing and piecemeal subsequent response, and lingering uncertainty over his movements in Ireland, including in Covid-19-restricted Kildare, cost him his job?

Whether he is asked to resign now is a matter for Commission President Ursula von der Leyen. Commissioners, once appointed, are no longer national representatives and are not answerable under the terms of their oath to national governments. Changes of government, for example, have never been allowed to affect their standing, no more than, analogously, the persistent unsuccessful efforts of the Polish government to undermine ex-Council President Donald Tusk.

Previous forced resignations, or legal action against commissioners, have tended not to be triggered by domestic controversies. Germany’s Martin Bangerman, France’s Edith Cresson, and Malta’s John Dalli, notoriously, were involved in serious conflicts of interest or behaviour which specifically impacted on their Brussels duties.

Von der Leyen may take the view that the matter is not near the level of seriousness to warrant action. But Hogan has not helped his own case by responding with a “drip feed”, as a Minister put it, of reactive statements that, at best, merely caught up with new information after it entered the public domain. The task of restoring public confidence may be beyond him but he could have done much more and he still can. Failure to do so fuels further suspicion.

Public officials have to demonstrate an appreciation of the need to accept personal responsibility for adhering to public health guidelines. They cannot simply pass the buck to others. The Oireachtas Golf Society dinner was an ill-conceived event and attendance at it diminished all present, most importantly those involved in public life. All had the option to walk away. That includes newly appointed Supreme Court judge Seamus Woulfe who, as his Supreme Court colleagues acknowledged in a statement on Monday, faces specific questions by virtue of his position.

Those involved in public administration – past and present – must recognise that they, and democracy, are undermined by a culture of double-standards and impunity. For that reason, no one is too big to fail.