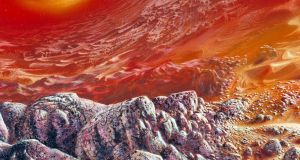 An image provided by NASA shows an artist’s conception of the surface of Venus. Hot enough to melt metal and with clouds full of acid, any life that could survive in the atmosphere of Venus would have to be capable of enduring extremes. Photograph: Rick Guidice/NASA via The New York Times

The great US astronomer Carl Sagan described Venus as the planet in our solar system most like hell. But he also suggested some 50 years ago that it might be home to life, and this week may have been proved right.

Misnamed after the god of love and beauty, our sister planet may be beautiful from here, but is wrapped in an inhospitable atmosphere 92 times denser, with clouds drenched in sulphuric acid, and an arid desert-like surface which reaches a withering 471 degrees Celsius. Hot and dense enough to melt lead and to squash like tin cans many of the early spaceships sent from here.

The discovery by telescopes in Hawaii and Chile of phosphine in the atmosphere has sent ripples of excitement through the scientific community, which had largely given up on Venus.

On Earth phosphine, a deeply toxic phosphorus atom with three hydrogen atoms attached, is produced by bacteria thriving in oxygen-starved environments like sewage plants, swamps, rice fields, lake sediments and the intestinal tracts of many animals. Militaries have used it as a chemical weapon, and on the TV series Breaking Bad our hero Walter White makes it to kill two rivals.

But phosphine, which is sometimes a product of microorganisms in “anaerobic” environments – ecosystems that do not rely on oxygen – can be a “biosignature” for live matter. Other potential sources on Venus, like volcanic explosions and lightning strikes, are not believed to generate sufficient energy to produce copious amounts of phosphine – and so, by eliminating the alternatives, scientists are suggesting that there may indeed be life, albeit in its most basic form. We are not talking little green men and certainly not intelligence.

Now the talk is again of planetary missions to our nearest neighbour as the science of the solar system takes a leap forward. Talking of which, please note that scientists are now also suggesting that the weird motions of a few ice balls billions of miles beyond Pluto could be evidence of previously unknown and unsuspected miniature black holes within this very solar system of ours.