The Irish Times view on Belarus: Moscow holds back for now 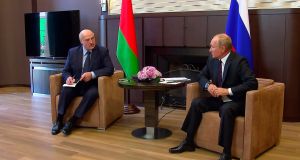 Demonstrations in Belarus have continued despite growing levels of brutality and intimidation. Tens of thousands were out in Minsk and other cities on Sunday braving beatings by police and 774 arrests that have included leaders of the opposition co-ordination council. Yesterday an increasingly beleaguered President Alexander Lukashenko flew to Sochi on the Black Sea again to ask President Putin to weigh in behind him.

No public statement was expected but press reports suggest that while Moscow is likely to continue to express public support for the dictator, behind the scenes it is planning for transition to a post-Lukashenko era.

Putin’s calculation is not easy. If he props up a regime that has lost legitimacy at home, he may temporarily achieve the closer political union between the two countries he wants but Lukashenko has so far been wary of. But at a price of losing control over the inevitable medium-term transition to a regime that he must hope will remain pro-Russian. The majority sympathy in Belarus for links with Russia may begin to dissipate, leaving little choice for Moscow but to maintain that union through coercion.

Hence his caution. The dispatch of paratroops to a joint military exercise near the city of Brest – farcically titled “Slavic brotherhood” – is about sustaining the public myth that Putin is concerned largely with possible external Nato intervention. Lukashenko is selling that improbable threat for all he is worth. He claims Russia’s help is vital to stop the “puppetmasters” running the protests from abroad as a test run for eventually overthrowing his “older brother” Putin.

Putin last month, however, did ominously promise that Russia had created an auxiliary police force to deploy to Belarus at Lukashenko’s request if protests turn violent. The announcement echoed the “little green men” Moscow sent to annex Crimea in 2014 after the pro-western revolution in Ukraine.

EU member states will do everything to ensure that their diplomatic response is calibrated not to provide Putin with any invasion justification. Mindful of the provocative effect of promises to Ukraine of a path to EU membership – later ditched – the EU will largely respect the unstated Russian insistence that Belarus remains part of its sphere of influence.

Targeted sanctions against 30 individuals involved in the internal crackdown, visa bans and asset seizures, are likely to be as far as ministers go at the Foreign Affairs Council on Monday. Lukashenko himself is currently not on the list. But ministers may not even get these limited measures. Cyprus is currently blocking agreement in an attempt to increase pressure for sanctions on Turkey over the latter’s Mediterranean oil drilling.

1 US presidential debate: who won, was it any good, were there any surprises?
2 US election: Joe Biden and Donald Trump clash in chaotic presidential debate
3 Miriam Lord: Another dog’s dinner as D’Arcy jumps on the gravy train
4 Man unidentified in psychiatric hospital for 30 years may have DNA taken
5 Gordon D’Arcy: If South Africa moves up north, it could all go south
Real news has value SUBSCRIBE