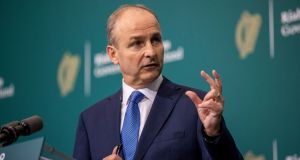 Taoiseach Micheál Martin has defended the cut to the pandemic unemployment payment on budgetary grounds, pointing out that it was initially envisaged that the scheme would run for just 12 weeks. Photograph: Tom Honan/PA Wire

Cutting the pandemic unemployment payment, a lifeline for 150,000 people who have lost their jobs over the past six months, was always going to be difficult to defend. But to persist with the reduction in the week that many people in Dublin again find themselves unable to work because of the latest public health restrictions appears strikingly insensitive on the Government’s part. To make matters worse, it chose this week to confirm that it had sanctioned the appointment of 10 special advisers to work with ministers of state.

Nearly every political party since the early 1990s has spoken of cutting back on special advisers only to regret it when they win office. That’s because, as the only person in a government department whose allegiance is to the minister and whose role is specifically to watch out for the political dimensions of any decision, they can serve an important function in ensuring that that minister’s agenda, and by extension the programme for government, is implemented. If the aim is to ensure that a government actually does what it was elected to do, then it should be possible to make a strong case for these roles.

But decisions such as this do not occur in a vacuum. Nor can they be somehow detached from the external political environment. So whatever justification there may be for hiring special advisers, it will quite naturally be lost amid the understandable anger over the cut to the PUP, from €350 to €200-€300.

Taoiseach Micheál Martin has defended the reduction on budgetary grounds, pointing out that it was initially envisaged that the scheme would run for just 12 weeks. That’s true. But the realisation that the crisis will continue well into next year, and perhaps beyond that, is not an excuse simply to reduce the supports that so many people rely on through no fault of their own to fund themselves and their families. Rather, it underlines the need to devise long-term sustainable support schemes for those, many of whom were low-earners to begin with, who have been so badly hit. That will be one of the key tests of the coming budget.