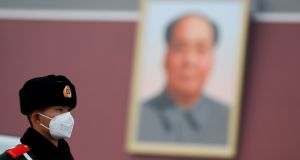 A paramilitary officer wearing a face mask stands guard at the Tiananmen Gate, as the country is hit by an outbreak of the new coronavirus, in Beijing on Monday. Photograph: Carlos Garcia Rawlins/Reuters

China is battling to contain the spread of the dangerous new coronavirus, but national authorities have acknowledged that the respiratory disease is spreading rapidly and that a further 1,000 cases are likely to be declared in Wuhan, the city where the first reported cases emerged. Some 2,700 people worldwide have already fallen ill with the virus, with at least 80 in China having so far been killed by it. Concerns have grown in the past 48 hours after Chinese health officials said people who are carrying the virus but not showing symptoms may still be able to infect others. That would make it much more difficult to control.

The unprecedented Chinese response to the outbreak has been a stunning demonstration of the power wielded by the country’s authoritarian government. The authorities have put Wuhan, a city of 11 million people, on lockdown and imposed travel bans elsewhere in the country. Two new hospitals to treat those affected by the virus are expected to be built and in use within weeks.

There is no guarantee the lockdown of Wuhan will succeed. A containment measure on that scale has never been attempted before. In theory it should limit the spread of the disease, but it will also put huge pressure on the supply of food, fuel and medical care, and could increase discontent and even create a sense of panic in the community at a time when the authorities need public support. It is also more permeable than many believe: in a startling admission, the city’s mayor said five million people left Wuhan before travel was restricted (the authorities announced the restrictions before they took effect). Cordons sanitaires imposed in parts of west Africa during the 2014-16 Ebola epidemic set off riots and were widely regarded as a blunder.

Yet while Beijing hopes such large-scale social control will enable it to contain the problem, another defining aspect of its authoritarian system – secrecy – also risks making the situation more difficult. Having lost credibility with its communication failures over the deadly Sars outbreak in 2002, the Chinese authorities have been much more open this time around, providing regular updates on the disease and national containment efforts. Still, information has circulated slowly. An unknown type of pneumonia was first reported in Wuhan on December 31st, but the city’s biggest newspaper did not feature the outbreak prominently for two weeks, and Chinese censors initially ordered media to report only official notices on the illness. It was also striking that several cases of the new coronoavirus were confirmed overseas before they were reported in Chinese cities other than Wuhan.

The virus poses huge challenges for China, and it should have all the help it needs to contain it. Public support will be vital, and full transparency is the only way to ensure that support holds firm.