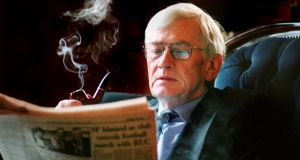 Born in the predominantly Protestant village of Markethill in Co Armagh, where he lived his entire life, Seamus Mallon had first-hand knowledge of the injustices suffered by the nationalist community but he also had a sympathetic understanding of the unionist mentality. Photograph: Bryan O’Brien

Seamus Mallon was one of the towering political figures in Ireland over the past half century. A man of extraordinary courage who braved repeated loyalist and republican death threats, he never wavered in the pursuit of justice and peace in Northern Ireland through the dark decades of the Troubles.

Mallon played a crucial role in negotiating the Belfast Agreement and ended up as Deputy First Minister in the resulting power-sharing executive. That elevation came after a long career in politics during which he was a member of the Northern Assembly, a senator in the Republic and a long-serving MP in the House of Commons.

Born in the predominantly Protestant village of Markethill in Co Armagh, where he lived his entire life, he had first-hand knowledge of the injustices suffered by the nationalist community but he also had a sympathetic understanding of the unionist mentality. He attended the funerals of all those murdered in his area either by the IRA or loyalist paramilitaries. In his autobiography, he recounted how his presence at such funerals was sometimes resented but he insisted on going, whether welcome or not, to show his abhorrence of violence by whomever it was perpetrated.

Mallon’s courage was accompanied by an eloquence that quickly brought him to prominence after he entered politics in the mid-1970s. He was regarded as an outstanding speaker in the House of Commons and he made a bigger impact there than his party leader, John Hume, who concentrated on winning friends and influencing people in Europe and the US.

Mallon’s command of words was illustrated by his coining of the phrase “Sunningdale for slow learners” to describe the intransigence of republicans and loyalists who destroyed the 1973 power-sharing deal only to reach a similar deal over two decades and many hundreds of deaths later.

Somewhat to his surprise he was appointed to the post of Deputy First Minister in the power-sharing administration that resulted from the Belfast Agreement. While there were some tensions between him and First Minister David Trimble during their period in office, Mallon had great sympathy for the First Minister, whom he considered had been let down by Tony Blair over the failure of the IRA to decommission until 2005.

Mallon was also critical of what he regarded as the Irish government’s pandering to Sinn Féin. He believed the two governments destroyed the middle ground in their desire to keep the extremes happy. True to his nature, he made an important intervention in the final year of his life by pointing out the dangers of an early Border poll despite his lifelong commitment to the cause of a united Ireland. It was appropriate that he received a prolonged standing ovation last year at a summer school named after Daniel O’Connell in whose patriotic tradition he rightfully sat.

1 Coronavirus: Aer Lingus cabin crew in self-isolation after passenger’s positive test
2 Murder in a crowded house: The full story of the Patricia O’Connor trial
3 Man (21) jailed for inflicting ‘catastrophic’ injuries on baby girl
4 Coronavirus: Myths that have gained traction
5 Britain is uncomfortable because Ireland has the upper hand for the first time
Real news has value SUBSCRIBE