The Irish Times view on the cash-for-ash scandal: Breathtaking incompetence 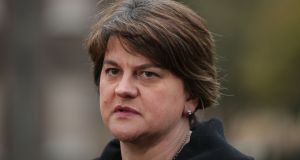 When she was a minister in Stormont, Arlene Foster introduced the Renewable Heat Incentive Scheme regulations and had it passed by the Northern Assembly. Photograph: Yui Mok/PA Wire

The litany of incompetence and irresponsibility at political and official level disclosed to date in the inquiry into the cash for ash scandal in Northern Ireland is breathtaking. It must raise serious doubts about whether the restoration of a devolved administration at Stormont on the existing power-sharing model is desirable even if the Democratic Unionist Party and Sinn Féin settle their differences.

The evidence given to date to the inquiry reveals that senior politicians had no idea about the financial implications of the deeply flawed scheme they were promoting and neither did many of the officials and political advisers.

Even worse, some who did realise the implications were actually happy to let the scheme run wild in the mistaken belief the British exchequer would foot the bill. It was only when it became apparent that the massive overrun would have to be covered by cuts to other programmes in the North that they began to sit up and take notice.

The story began in 2011 when the Northern Ireland Executive decided that four per cent of the region’s heating needs should come from renewable sources by 2015, with that figure increasing to 10 per cent by 2020. The responsible minister, Arlene Foster, introduced the Renewable Heat Incentive scheme and had it passed by the Assembly. Foster, a solicitor who subsequently became DUP leader, later admitted that she had “absolutely not” even read the legislation. The basic flaw in the scheme was that the grants available for burning wood pellets were greater than the cost of the fuel, thus providing an incentive to burn as much fuel as necessary to generate the maximum funding. Some boilers ran nearly full-time as a result.

While the scheme was largely based on Westminster legislation there was one important difference. The system of tiered tariffs to discourage waste by cutting the subsidy after a set number of hours in the rest of the UK was dropped by Stormont officials. The effect was to provide a financial incentive to waste fuel at enormous cost to the Exchequer. The inquiry has revealed a shocking culture at Stormont, including evidence of the use of post-it notes on documents to relay messages which could later be destroyed, leaving no evidence. More worrying, clear evidence of conflicts of interest involving the political class and business did not merit disquiet at official level.

The head of the Northern Ireland civil service, David Sterling, told the inquiry that officials often did not take minutes, believing that the DUP and Sinn Féin did not want records that could be later found under the Freedom of Information Act. The inquiry raises profound questions about the viability of a political system that does not involve collective responsibility by ministers but instead allows departments to operate as independent entities with no proper system of accountability.