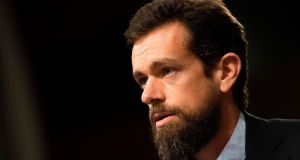 Twitter chief executive Jack Dorsey testifies before the Senate Intelligence Committee on Capitol Hill in Washington in 2018. Dorsey last week backed the company’s ban of US president Donald Trump, but said it sets a “dangerous” precedent and represents a failure to promote healthy conversation on the platform. Photograph: Jim Watson / AFP via Getty Images

For Donald Trump, the social media megaphone is gone. For years, the US president has conducted the majority of his public interactions, issued policy intentions, and vented his anger and frustrations via his Twitter account, with his Facebook presence providing further social media reach and video dispersal.

A combination of bombast, bully pulpit and bile, peppered with odd Teutonic capitalisations of random nouns and broken grammar, Trumpian social media often symbolised what many have long criticised as the worst side of social media. With regular furious attacks on individuals, tweets that conveyed distortions of facts as well as outright lies, and retweets of content taken from extremist far-right groups, the president showed the many ways in which a high-profile social media account could be politically weaponised and milked for personal advantage.

And until the final weeks of his presidency, he did so with virtual impunity. On the basis that the president was an elected politician and national leader, Twitter, Facebook and YouTube declined to apply even the most basic moderating standards to his constant utterances. Posts were regularly allowed that for virtually anyone else would have breached platform rules, risking removal, or the banning of the account holder.

Until the final stages of this presidency, as far as the platforms were concerned, the most distorted political claims and campaign advertisements were deemed fine if they came from Trump (or politicians generally). Only at the very end of a presidential election campaign and its aftermath, did the platforms begin to clamp warning notices on to disputed claims, remove distorted and outlandish content, or prohibit it being shared.

Still, many wondered how far would be too far. Last week, that question was answered. We now know it takes the presidential response to a full-on riot in the US Capitol led by far-right Trump supporters, who were sent the “love” of the president by platform-circulated video even as they swarmed inside Congressional hallways and beat police officers, causing the death of one.

An FBI memo last week, warning of the likelihood of further armed protests in Washington and all 50 state capitols, reinforces the platforms’ decision to eliminate Trump’s ability to exacerbate this fraught and dangerous environment.

But that decision now raises many perturbing questions. What about other politicians or governments across the world that also post divisive, false, or dangerous content? Why are all such accounts not held to higher, rather than lower, standards than those of the general public?

And perhaps the most difficult question of all: does that same public wish to make private companies, accountable only to themselves, the gatekeepers of censorship in our virtual public spaces?