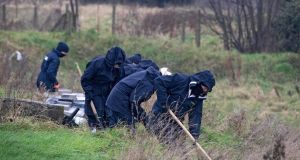 Gardaí searching an area known locally as The Banks near a house on Rathmullen Park, Drogheda. Photograph: Colin Keegan/Collins

The dismembering of the remains of homicide victims is not new to Ireland, though fortunately, the number of cases has been very small. With the murder of Keane Mulready-Woods, however, there is a sense that a Rubicon has been crossed within Irish organised crime.

The victim is a 17-year-old boy, drawn into the drugs trade and his life extinguished by it before he had even reached adulthood. His body was not dismembered to frustrate subsequent criminal investigations or to ease its disposal but because the gang suspected of his murder had made a specific threat that this would be his fate and were depraved enough to follow through on it.

The treatment of the boy’s remains was deliberately intended to cause maximum intimidation, gardaí believe. Parts of his body were left at two locations in Dublin because his killers wanted to demonstrate what they were capable of. In doing so they adopted a tactic associated with Latin American and Asian crime cartels.

Gardaí have committed themselves to tackling the feuding gangs in Drogheda. And when such criminality has occured in the past, many gang members have been successfully taken out of commission through determined Garda work. Chief Supt Christy Mangan’s assertion that a crime like the murder of Mulready-Woods had no place in any democratic society was a tacit admission that the group responsible was challenging the authority of the State. That is a confrontation the forces of law and order must – and will – win.

Equally worrying and challenging is the reality that teenagers are being recruited by gangs across the State. Lured by the prospect of instant wealth and influence within their communities, they are deployed as foot soldiers, dispensing threats and violence and transporting and selling drugs. This cycle needs to be broken. Children must be reached as they enter national school if not before. Early intervention projects must be established in disadvantaged communities and must be well resourced. Attractive alternatives need to be visible to young people at risk.