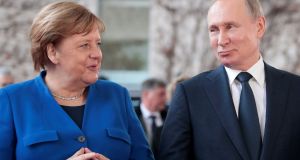 German chancellor Angela Merkel and Russian president Vladimir Putin pose for a picture as he arrives to attend the Libya summit in Berlin on Sunday. Photograph: Axel Schmidt/Reuters

Eight years after France and Britain led a military intervention to topple Muammar Gadafy without having considered how to manage the aftermath of the dictator’s fall, European states are belatedly making a serious effort to end the violence and chaos that have engulfed Libya ever since.

A summit hosted by Chancellor Angela Merkel in Berlin at the weekend brought together key warring factions and their foreign sponsors, but the modest outcome underlined how the country’s conflicts have become deeply enmeshed with the strategic interests of key powers in Europe and the Arab world.

Haftar...has led a months-long assault on Tripoli and performed a show of strength in recent days by shutting down virtually all of Libya’s oil fields

Among those in Berlin were the military commander Khalifa Haftar, whose forces control much of eastern Libya, and the Tripoli-based prime minister Fayez al-Sarraj, who leads the UN-recognised government of national accord. Haftar, who is backed openly by Egypt and Saudi Arabia and tacitly by Russia, France and the US, has led a months-long assault on Tripoli and performed a show of strength in recent days by shutting down virtually all of Libya’s oil fields – a move that caused the country’s output to drop to the lowest level since 2011. Sarraj enjoys support from Turkey and the EU, although divisions within the bloc have compromised its ability to speak with one voice on Libya.

Merkel struck a positive note after the summit, pointing to the general acceptance of two points: that an arms embargo needed to be enforced and that a political solution was required. But there was no durable ceasefire deal – merely an agreement on both sides to nominate five people to attend talks on a permanent end to the fighting – and there is no obscuring the scale of the task ahead. The US and EU lack leverage in Libya, where Russia and Turkey, deeply involved in the civil war through proxy forces, have shown little inclination to back down. But given the horror visited daily upon Libya’s people and the country’s strategic importance as a gateway between Europe and north Africa, the stakes are too high for the EU to sit on the sidelines.