The Irish Times view on Palestinian refugees: a time for solidarity 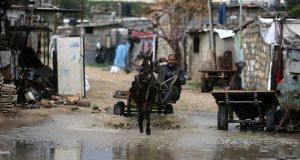 The United Nations Relief and Works Agency (Unrwa) faces a critical year after its main source of funding from the United States government was cancelled by US President DonaldTrump. The agency’s budget was cut by a third. Its essential work of providing basic education, healthcare, microfinance and infrastructure aid for more than five million Palestinian refugees in the West Bank, Gaza, Syria, Jordan and Lebanon is threatened unless it is refunded for these and other commitments.

Last year’s shortfall and an overhanging debt of $146 million was made up mainly by the European Union and Gulf states, but more solidarity is essential to ensure Unwra’s work can continue. Those filling the gap disagree with the underlying rationale of the US decision, expressed by Trump’s son-in-law Jared Kushner, who says Unrwa “perpetuates a status quo, is corrupt, inefficient and doesn’t help peace”. The decision is part of a wider but as yet unannounced US peace plan between Israel and the Palestinians which these critics say is loaded unacceptably towards Israel.

According to this rationale Unrwa prevents Palestinians settling permanently in the countries they now live in and perpetuates an unrealistic expectation they can return to Israel. Charges of corruption and inefficiency have been disproved by a series of investigations. Unrwa is not perfect and, like all such organisations, needs renewal, but it fulfils indispensable functions for the most vulnerable and poorest Palestinians. Its work must continue and deserves international support.

Israel’s sharp shift to the right in recent years, based on coalitions with West Bank settler parties, is supported by the Trump administration. They aim to alter the basic framework of the two-state peace process. Announcing Ireland’s decision to increase its Unrwa contribution last month, Tánaiste Simon Coveney rightly spelled out that its work is needed, “until a durable solution to the Israeli/Palestinian conflict can be negotiated that meets the needs of both parties, ends the occupation that began in 1967 and resolves all final status issues.”