The Irish Times view on the FF/SDLP merger: A challenging political union 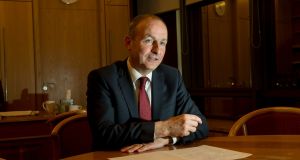 A merger between Fianna Fáil and the SDLP represent a gamble for both parties but it appears that the leadership on each side has come to the conclusion that the opportunities outweigh the risks. A formal announcement is expected in the coming months.

What is described as a phased process leading to integration has some obvious attractions for the SDLP. The party’s fortunes have been in steady decline for the past 20 years and there must be serious doubts about its ability to survive in the long term without a dramatic change of direction.

Back in 1998, the year of the Good Friday Agreement, the SDLP won 24 seats compared to Sinn Féin’s 18 in the Northern Assembly elections. Last year Sinn Féin won 27 seats, while the SDLP won just 12. Westminster election results have been even more stark. In 1998 the SDLP had three MPs, while Sinn Féin had two; now Sinn Féin has seven and the SDLP none.

While it clearly needs to do something radical there are internal voices of opposition with Fianna Fáil. The party has had a long-standing relationship with the Labour Party in the Republic and was a member of the Socialist Group in the European Parliament. More pertinently John Hume always sought to keep the SDLP out of party politics in the Republic so that it could exercise maximum leverage with whoever was in government in Dublin.

However, the current dominance of Sinn Féin as the party of Northern nationalism means the days of SDLP influence in Dublin have long gone. It arguable that integration with Fianna Fáil will give it more clout in Dublin while being part of an all island political movement could lead to some revival of fortune in the North.

The increasingly obvious shortcomings of Sinn Féin have created an opening for a new departure. The absence of an administration at Stormont and Sinn Féin’s abstentionist policy at Westminster have left Northern nationalism without a voice on the biggest issue to face this island in generations. There may never be a better opportunity for the SDLP to reinvent itself.

From a Fianna Fáil perspective, the attractions of a merger are not so clear. The party is already engaged in a bitter battle with Sinn Féin for votes in the Republic. Bringing the fight to the North, where Sinn Féin is well established as the leading nationalist force, could easily backfire.

The first hurdle for any new arrangement will be the local elections on both sides of the Border in May. Back in 2014 the SDLP won 66 council seats, compared to 105 for Sinn Féin. By contrast Fianna Fáil was the biggest party in the Republic with 267 seats in 2014 compared to 159 for Sinn Féin. This year’s contest in both jurisdictions will be the definitive test for the planned merger.