The Irish Times view on the world in 2019: the year of second thoughts 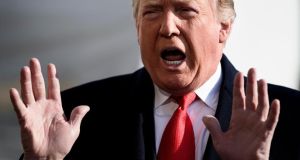 If Brexit and Donald Trump were the great harbingers of a turn towards enraged irrationality in 2016, the nakedness of their claims will be abundantly clear in 2019. Photograph: Brendan Smialowski/ AFP/Getty Images

In his Reflections on the Human Condition, the American blue-collar philosopher Eric Hoffer wrote that “unpredictability, too, can become monotonous.” As we look forward to 2019, we are in danger of succumbing to a monotony of the unpredictable. Things that might have seemed scarcely credible but a few years ago now seem almost drearily familiar. We wake in the morning and scarcely bother wondering what outrage the president of the United States may have tweeted while we slept. It is a strange moment to inhabit.

On the one hand, we can confidently predict extreme unpredictability. On the other, even the things we know will happen in 2019 come with a very large element of the unknown. They are, as Donald Rumsfeld once famously put it, known unknowns.

Thus, in our part of the world, we have had a date with destiny pencilled in for 21 months already: March 29th 2019, the day Brexit is due to come into effect. It was once hailed by the most enthusiastic of the true believers as Independence Day for the United Kingdom, the moment when 45 years of alleged submission to Brussels is thrown off and a new British history begins. But the nearer we come to this promised moment of clarity, the murkier it has become.

It is not just that we still cannot say how and under what conditions it will happen. It is that we cannot say whether it will happen at all. Something has to be decided in the first weeks of the year, but the range of possibilities from a catastrophic no-deal withdrawal to a second referendum is almost as broad as it has ever been.

– and yet its outcome will have a huge bearing on life and politics in Ireland. Aside from the well-rehearsed concerns about the Border and trade, it will raise two big and interrelated questions.

One is whether the Government can stop itself from being simply sucked into the Brexit vortex, whether it can concentrate with sufficient urgency on the strictly domestic crises of housing, healthcare and child poverty. 2019 will be the centenary of the first Dáil and of its Democratic Programme, reminding us of how seriously our republic continues to fall short of the promises it made at its inception, especially the promise to place the welfare of children at it heart.

The other question is whether, given its obvious struggles with such basic social and economic needs, the State is really as well prepared for the challenges of Brexit as it claims to be. If there is to be a disorderly British departure from the EU, the competence and resilience of the State will be subjected to a ferocious test.

Another known unknown is the condition of governance in the United States. What we know is that the new Democratic majority will take office in the House of Representatives, acquiring the power to launch multiple investigations into Donald Trump, his businesses and his wildly erratic presidency. We also know that the inquiry of the independent counsel Robert Mueller into alleged collusion between the Trump campaign and Russia will reach its endgame. We know that Trump will rant and rail and whip his supporters into a frenzy of denunciations. But we do not know how deeply damaged he will be and how far he will go to distract from the emerging stories. He probably does not know himself.

European elections Equally, we know there will be elections to the European Parliament in May and it seems reasonable to suggest that they will be by far the most important in the 40 years since direct elections to that institution began. With such ferocious discontent across much of Europe

– Frances’s gilets jaunes protests being only the latest manifestation – this will be a huge test of whether the broad consensus that underpins the EU can hold or whether it will be fatally undermined by the resurgence of reactionary nationalism, populist rage and authoritarian demagogy.

And hanging over all of this is the most predictably unpredictable force of all: climate change. Humanity as a whole has seldom been in greater need of a sense of common purpose and of the political and institutional stability necessary to carry that purpose to fruition. Yet that very stability is what is so clearly lacking. Here too there is a terrible danger of monotony, of the dire warnings losing force and those who are alive to the great perils losing hope.

Hope must be restored in 2019. Democracies, including our own, retain an immense capacity for rational, decent, humane and enlightened self-interest. That capacity must surely be awakened by the evidence of self-harm that is by now so apparent. If Brexit and Trump were the great harbingers of a turn towards enraged irrationality in 2016, the nakedness of their claims will be abundantly clear in 2019.

This should be the year of second thoughts, the year when the politics of fear are checked by the realisation that rage cannot solve the collective problems we face. What we really can predict is that only serious and urgent hope can do that.

1 Asylum claims by Georgians and Albanians brought to abrupt halt
2 Miriam Lord: Does anyone care if Leo smoked or snorted?
3 Fresh delays and millions in extra costs for children’s hospital revealed
4 Hilary Fannin: What I wish my spouse and I had done the morning of our wedding
5 Housing crisis: Seven solutions to Ireland’s biggest problem
Real news has value SUBSCRIBE