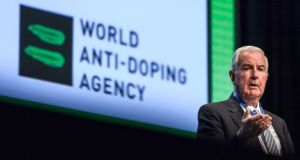 The World Anti-Doping Agency (Wada) faces a very serious problem after Russia missed the New Year’s Eve deadline to allow access to the Moscow lab at the heart of its evidently endemic state-sponsored doping programme. The same programme is proven to have “sabotaged” both the London 2012 Olympics and the 2014 Winter Olympics in Sochi.

These revelations are four years in the making, a German TV documentary having first lifted the lid on the Pandora’s Box of Russian doping in December 2014, backed by evidence in independent reports in November 2015, and again July and December 2016. Several deadlines have come and gone in that time, the one consistency being that the Russian anti-doping agency (Rusada) has missed them all – as if playing some sort of roulette with their own sporting credibility.

Wada, playing some sort of game of its own, reinstated Russia in September, on condition Moscow opened that anti-doping lab by December 31st, and whatever remaining secrets came with that. Again they were told no, this time because Wada equipment wasn’t certified for use in Russia. No wonder Travis Tygart, the head of US Anti-Doping, branded the situation “a total joke”, and he’s not alone: athletes and anti-doping agencies around the world have called on Wada to stop playing games with Russia and declare the country non-compliant for anti-doping purposes.

Sport Ireland chief Executive John Treacy this week said: “As has been the case from the outset of this ordeal, there has been a continual shift of the goalposts in relation to the reinstatement of Russia’s compliance”. Wada’s own Athlete Committee, a voice for the clean athlete, has also demanded that Russia be immediately declared non-compliant. “Anything less will be considered a failure by Wada to act on behalf of clean athletes,” it said.

Following what it says is “due process”, Wada’s Compliance Review Committee won’t make a decision on Russia until its next meeting in Montreal on January 14-15th. For the sake of clean athletes and sport there can only be one outcome.

1 One hundred Irish retailers for all your online Christmas shopping
2 Miriam Lord: All test and no trace makes Jack, and heaven knows who else, a very ill boy
3 What I learned about male desire in a sex-doll factory
4 Des Bishop apologises to Traveller community for comments in interview
5 Varadkar says ‘dumping’ contact tracing problem on GPs ‘unfair’
Real news has value SUBSCRIBE