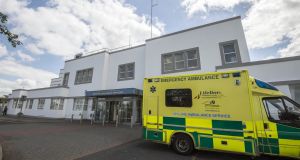 Ireland’s maternity services have been under intense scrutiny since major failings emerged in 2012 at the maternity unit of the Midland Regional Hospital in Portlaoise. Photograph: Brenda Fitzsimons

Hiqa, the State’s health watchdog, has produced a comprehensive review of Ireland’s maternity services, which have been under intense scrutiny since major failings emerged in 2012 at the maternity unit of the Midland Regional Hospital in Portlaoise. That in turn led to the publication of a National Maternity Strategy in 2016.

Only the maternity units in Cork, Cavan, Drogheda and Wexford are found by Hiqa to be substantially compliant with standards on physical infrastructure, with the remaining 15 units judged to be in need of significant upgrading and refurbishment. And despite the significant risk to expectant mothers and their babies identified in various reports, just 11 per cent of the money originally promised to implement the maternity strategy has been provided by Government. Of an estimated cost of €75 million for the 10-year strategy, only €8.5 million was provided in its first three years.

An especially worrying finding by Hiqa is that many maternity unit staff were not being trained in the use and interpretation of baby heart-monitoring equipment. This was a major shortcoming identified in the death of newborn Mark Molloy in 2012 at Portlaoise. His parents Róisín and Mark have since campaigned relentlessly for training and other deficits in maternity units to be addressed.

Apart from the continuing harm to babies and avoidable distress for parents, a failure to correctly monitor babies’ condition during labour is a big contributor to the rising cost of obstetric claims for the State. That the Government allows medico-legal claims to balloon while failing to adequately fund a strategy that would help reduce the number of incidents leading to these claims makes no sense. Another stand-out failing is the Hiqa finding that foetal ultrasounds remained unavailable at five of the 19 maternity units in the State. As well as placing babies’ lives at risk due to a lack of adequate surveillance, not having access to accurate scanning may contribute to the misdiagnosis of miscarriage and a possible premature termination of pregnancy.

1 Coronavirus: Ireland should ‘look seriously’ at closing borders to keep new infections out
2 A letter to Ireland from Italy: this is what we know about your future
3 'The last time I saw her was when she was being put into the ambulance'
4 Sam McConkey: Tough next steps against coronavirus will require political consensus
5 Workers may face tax bill on emergency State wage subsidy
Real news has value SUBSCRIBE