The Irish Times view on Israel-Palestine: the world must not look away

While Israelis and Americans celebrated in Jerusalem, Palestinians were killed in Gaza 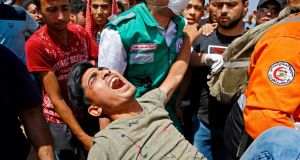 Emergency services and Palestinians carry a wounded protester near the Gaza fence on Monday. At least 50 Palestinians were killed by Israeli forces in the area on Monday. Photograph: Mohammed Abed/AFP/Getty Images

The contrast was grotesque. As Israeli and American dignitaries stood smiling on a platform in Jerusalem, hailing the transfer of the US embassy to the city as a step towards peace, dozens of Palestinians were being gunned down by Israeli snipers at the fortified fence that keeps them in Gaza.

The two events today – the inauguration of the embassy and the Gaza protests – took place on the 70th anniversary of the creation of the state of Israel, and a day before Palestinians commemorate 70 years since the Nakba, or catastrophe – the mass displacement of 750,000 Palestinians, who left or were forcibly evicted from their homes in what is now Israel in 1948.

As the day illustrated in horrific fashion, the anniversaries fall at a time of acute tensions and almost total political stasis. The despondency predates Donald Trump’s rise to power, but his reckless decisions in the Middle East – to call them policies implies a level of strategic thinking they scarcely warrant – have made the situation more dangerous while creating new problems that will remain to be dealt with long after his disgraceful presidency comes to an end.

The longer the current hiatus continues, the more difficult it becomes to resolve the conflict

His decision to recognise Jerusalem as Israel’s capital delighted many Israelis and US evangelicals, but it has dashed any remaining hope that a peace process can be initated at least for the duration of his term in office. Instead of seeking to assuage Palestinians by offering them a commensurate gesture, such as a promise that East Jerusalem will become capital of a future Palestinian state, Trump sought to punish them by withholding money from the United Nations relief agency for Palestinian refugees.

The longer the current hiatus continues, the more difficult it becomes to resolve the conflict. And the more dire life becomes for Palestinians. That is because the humanitarian situation in Gaza grows more alarming by the week, Israeli politics are moving to the right, illegal settlement-building continues apace, intra-Palestinian reconciliation has stalled and Hamas refuses to renounce violence.

The world cannot turn away, however. In the absence of US leadership, an even greater onus falls on other global and regional powers – not only to work to calm tensions but to use whatever tools are at their disposal to ensure that by the time a new peace process can begin in the post-Trump era, the conditions on the ground still allow for two viable states side by side.

1 Irish tourists excluded from visiting Greece and Croatia
2 Taoiseach has confirmed schools will reopen at the end of August
3 We need to pay very close attention to what is happening in Britain now
4 Sideline Cut: Vignette shows why Bird is the true shark in The Last Dance
5 The strain is starting to tell on Brendan O’Connor
Real news has value SUBSCRIBE