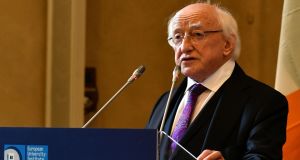 In Florence last week President Michael D Higgins spoke of the need to rediscover the fundamental EU value of solidarity to “give the lie to an idea that in its conception the European project was simply and exclusively about capital and markets.” Photograph: Claudio Giovannini/EPA

Developing policies that will re-energise the European Union and give concrete expression to the ideals of its founding fathers is one of the biggest challenges facing political leaders across the continent today.

In recent years, the union has trundled from one crisis to the next and the passion that excited successive generations of European leaders in the second half of the 20th century has been sadly lacking. The election of president Emmanuel Macron in France changed the atmosphere, and there is a greater awareness among EU leaders and the commission in Brussels that things cannot be allowed to drift for much longer.

In Florence last week President Michael D Higgins spoke of the need to rediscover the fundamental EU value of solidarity to “give the lie to an idea that in its conception the European project was simply and exclusively about capital and markets”. He’s right. The EU was never simply about capital and markets. It has been animated by the notion of solidarity throughout its development, including the admission of poor countries like Ireland and former dictatorships of east and west.

It is also worth remembering the huge challenges that the EU has overcome in recent years. It coped with the existential threat of the Euro crisis and while action was often late and inadequate it ultimately did enough to ensure the currency survived. More recently the decision of the United Kingdom to leave did not trigger the feared break-up of the EU but instead prompted the remaining 27 member states to band together more tightly. The solidarity being shown with Ireland on the Border issue is an example of the EU at its best.

That said, there is no doubt about the need for a new vision for the union if it is going to surmount the myriad challenges it faces. This is why Ireland should respond positively to the rallying cry of Macron. There are natural fears that his emphasis on tax harmonisation could threaten our economic model, but a system that allows the world’s biggest multinationals to pay virtually no tax simply cannot be allowed to continue.

On a practical level Ireland, which has benefited so greatly from EU financial transfers over the decades, needs to show the same level of solidarity with the poorer countries of eastern Europe struggling to raise their people’s living standards.

Taoiseach Leo Varadkar has announced Ireland is prepared to significantly increase its net contribution in the years ahead. While that is welcome, he and his colleagues in Government need to do much more to develop a vision for the kind of Europe they want.

The “Citizens’ Dialogue” on the future of Europe is a worthy attempt at getting the public involved in developing that vision, but more imaginative ways of getting the attention of the ordinary citizen are required.